CAIRO, Aug. 4 (Xinhua) -- As the COVID-19 continued to spread in the Middle East on Tuesday, Iran saw its total cases approaching 315,000. Meanwhile, Turkey's daily hike in coronavirus infections exceeded 1,000 for the first time in three weeks.

Lari said that the death toll from the virus rose to 17,617 after 212 new deaths were added, while there have been 272,535 recoveries in the country.

The minister warned of resurgence as the daily new COVID-19 cases exceeded 1,000 for the first time in weeks. He also expressed concerns about the consequences of the social contacts in the summer holiday and the recent Muslim holiday of Eid al-Adha.

Saudi Arabia's accumulated coronavirus cases rose to 281,435 on Tuesday after the registration of 1,342 new infections, the Saudi health ministry tweeted.

Meanwhile, 1,635 more patients recovered from the virus, raising the recoveries in the kingdom to 243,688, while the death toll soared to 2,984 after 35 new fatalities were reported.

In Iraq, the health ministry reported 2,836 new COVID-19 cases, the highest daily hike in the region on the day, raising the total number of cases to 134,722.

Iraqi Health Minister Hassan al-Tamimi said that hospitals in Baghdad that had been required to receive coronavirus patients will not assume the duty anymore.

The health ministry has assigned two hospitals in Karkh area on the western bank of Tigris River and two others in Risafa area on the eastern bank of the river for COVID-19 patients, al-Tamimi explained.

In Israel, the total number of COVID-19 cases climbed to 76,198 after 1,768 new infections were reported, while the death toll rose by 15 to 561. This is the highest daily increase of deaths in Israel since the pandemic outbreak in late February.

The Kuwaiti Health Ministry also announced the recovery of 587 more patients, raising the total recoveries in the country to 60,326.

Qatar's Health Ministry on Tuesday announced 216 new COVID-19 infections, raising the total confirmed cases in the Gulf state to 111,538, including 108,254 recoveries and 177 deaths.

The United Arab Emirates (UAE) announced 189 new COVID-19 cases and 227 new recoveries, bringing the total confirmed cases in the country to 61,352 and the tally of recoveries to 55,090.

The country has reported no deaths from COVID-19 for a fourth consecutive day, as the nationwide death toll stood at 351.

Morocco on Tuesday reported 1,021 new COVID-19 cases, raising the total number of coronavirus infections in the country to 27,217.

In Syria, the Health Ministry announced 45 new COVID-19 cases on Tuesday, bringing to 892 the total number of confirmed coronavirus cases, including 46 deaths and 283 recoveries.

Four players of the Syrian national football team have been tested positive for COVID-19, the team said in a statement on Tuesday.

In Yemen, the total number of COVID-19 cases in Yemen's government-controlled provinces increased to 1,760 on Tuesday, as 26 new cases were confirmed. The total recoveries in the areas increased to 863 while the death toll climbed to 506.

Jordan on Tuesday reported six new COVID-19 cases, all passengers coming from abroad, raising the total number of confirmed cases in the country to 1,224.

Jordanian Minister of State for Media Affairs Amjad Adaileh said that the previous decision to reopen the airports for international flights on Aug. 5 has been postponed based on recommendations from the anti-pandemic committee. 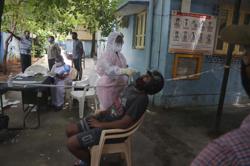