FILE PHOTO: A woman holds a small bottle labeled with a "Vaccine COVID-19" sticker and a medical syringe in this illustration taken April 10, 2020. REUTERS/Dado Ruvic/File Photo

The company said it would likely move forward with the lower of two tested doses of the vaccine. It reported that eight study participants experienced adverse side effects after receiving a second vaccine dose during the trial. The company said none required medical intervention.

Headache, fatigue, and muscle pain were among the more common side effects, and the vaccine was "well tolerated" overall, the company said.

"When you are talking about vaccinating the entire world, safety is almost more important than efficacy," said Brad Loncar, chief executive of Loncar Investments, an investment fund specializing in biotechnology companies.

Maryland-based Novavax said its vaccine candidate, NVX-CoV2373, produced higher levels of the antibodies in healthy volunteers after two doses than those found in recovered COVID-19 patients, raising hopes for its eventual success.

The addition of the company's Matrix‑M adjuvant, a substance designed to boost the body's immune response, did enhance the effect of the vaccine in the study, the company said.

The Novavax vaccine is among the first of a handful of programs singled out for U.S. funding under Operation Warp Speed, the White House program to accelerate access to vaccines and treatments that can fight the virus.

Effective vaccines and treatments are considered essential to halting a pandemic that has claimed more than 695,000 lives worldwide.

The U.S. government in July agreed to pay Novavax $1.6 billion to help cover costs related to testing and manufacturing the vaccine, with the aim of procuring 100 million doses by January 2021.

The trial, which started in late May, tested the vaccine in 106 subjects aged 18 to 59 versus a placebo. Phase I of the study looked at the vaccine's safety and ability to induce immune responses.

It tested 5 microgram and 25 microgram doses of the vaccine, with and without the adjuvant.

The Phase II portion of the study will be conducted in multiple countries, including the United States. It will gauge the vaccine's ability to prevent infections or reduce severity of COVID-19, in addition to safety and immune response, among a broader range of volunteers.

(Reporting by Julie Steenhuysen in Chicago, Carl O'Donnell in New York, and Manas Mishra in Bengaluru; Editing by Bill Berkrot) 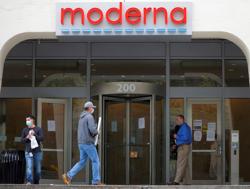