COLOMBO -- Sri Lanka-China mutual cooperation was emphasized at the inauguration of the country's first-ever association for Sri Lankan alumni of the People's Liberation Army National Defence University (PLA NDU) in Colombo on Thursday.

Speaking at the inauguration ceremony of the Chinese National Defence University Alumni Association of Sri Lanka, retired Major General Vijitha Ravipriya said the organization would serve as a bridge to connect PLA NDU alumni in Sri Lanka with its alma mater in China, and help continue the centuries-long friendship between the two countries. (Sri Lanka-China-Ties)

HONG KONG -- Chief Executive of the Hong Kong Special Administrative Region (HKSAR) Carrie Lam on Friday announced the postponement of the 2020 Legislative Council (LegCo) General Election of the HKSAR due to the current COVID-19 outbreak.

The election for the seventh-term LegCo members of the HKSAR, originally scheduled for Sept. 6, 2020, will be postponed for one year, Lam said at a press conference. (Hong Kong-LegCo election-Postponement)

WELLINGTON -- China's southeastern city of Xiamen has donated a total of 50,000 surgical face masks to Wellington to help the New Zealand capital in its fight against COVID-19.

Chinese Ambassador Wu Xi handed over the donation to Wellington City Council and Mayor of Wellington Andy Foster at a ceremony here on Friday. (China-New Zealand-Donation)

Nasima Sultana, a senior Health Ministry official, said in a briefing in Dhaka that "2,772 new COVID-19 positive cases and 28 deaths were reported in the last 24 hours across Bangladesh." (Bangladesh-COVID19-Cases)

HANOI -- Vietnam's Ministry of Health confirmed on Friday that a 70-year-old Vietnamese man died of COVID-19, which is the country's first death from the disease, Vietnam News Agency reported.

The patient, with a history of heart failure and pneumonia, tested positive for COVID-19 on July 26 and died in the early morning on Friday, according to the news agency. (Vietnam-COVID19-Death)

MANILA -- The number of COVID-19 cases in the Philippines surged to 93,354 after the Department of Health (DOH) reported 4,063 new cases on Friday, the largest single-day increase in confirmed cases since the highly-infectious disease emerged in the country in January.

The DOH said that the number of recoveries further rose to 65,178 after it reported 165 patients have survived the disease.

The death toll also increased to 2,023 after 40 more patients have succumbed to the viral disease, the DOH said. (Philippines-COVID19-Cases) 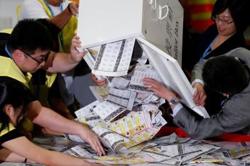