KHARTOUM, July 31 (Xinhua) -- At least 13 people were killed and 51 others were injured in a traffic accident in Gezira State in central Sudan on Friday.

"The accident took place when a commodity transport truck collided with a mini passenger bus at Al-danagla area of the Gezira State in central Sudan," said the press office of Sudanese Police in a statement.

"The incident happened due to reckless driving and wrong crossing by the driver of the commodity truck," it added.

Sudan is among the countries with the highest death rates in traffic accidents, mainly due to careless driving, poor road conditions and poor vehicle scrapping system. 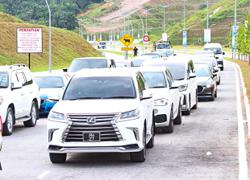 Persiaran Shorea open for use, expected to ease traffic woes

Death of U.S. embassy employee in Ukraine may be crime or accident: Ukrainian official