FILE PHOTO: French President Emmanuel Macron delivers a speech during a meeting with members of the Citizens' Convention on Climate (CCC) to discuss over environment proposals at the Elysee Palace in Paris, France June 29, 2020. REUTERS/Christian Hartmann/Pool/File Photo

PARIS (Reuters) - France is creating three beefed-up ministries to spearhead its recovery from coronavirus turmoil as Emmanuel Macron attempts to recast his presidency less than two years before a possible re-election bid.

In a cabinet reshuffle days after voters punished Macron and his party in local elections, the president and his new prime minister, Jean Castex, are putting the focus on tackling the pandemic's social and economic fallout, and the environment.

Macron, 42, swept into power in 2017 promising to cut corporate taxes and ease regulation to drive growth and create jobs, while protecting the most vulnerable. But the worst depression in decades has reversed some hard-fought gains and left Macron with 21 months to persuade voters that his reforms will leave them better off.

On the eve of the reshuffle, Macron said his 2017 campaign promises remained central to his policymaking. But he said they must "adapt to international upheavals and the crisis we are living through: a new path must be drawn."

Political rivals denounced the reshuffle as window-dressing that would not deliver the "new path" Macron promises.

Bruno Le Maire, who spent heavily to keep flagship companies afloat and save jobs during the lockdown, will stay at the helm of a finance ministry tasked with steering France out of the downturn, and now has full control of the budget.

Elisabeth Borne will take charge of an enhanced labour and social affairs ministry just as the depression unravels gains on unemployment. Macron wants to reset relations with unions and voters after waves of protests.

Borne, who successfully pushed through changes to French railways in the face of union opposition, will be in charge of seeing sensitive pension reforms over the line.

A week after the Green party seized control of some of France's biggest cities, including Lyon and Bordeaux, establishing themselves as a real political force, Macron also named former ecologist Barbara Pompili as environment minister.

In 2018, she chaired a parliamentary committee that delivered a report critical of France's nuclear power industry. A senior source inside state-owned utility EDF

But Greenpeace France said it was sceptical how much influence over environmental policymaking Pompili would have.

A presidential aide said the theme for the main economic briefs was "continuity", in a sign Macron will not veer left and will seek to consolidate his centre-right base ahead of 2022.

Macron's appointment of Castex, a little-known senior civil servant, as prime minister was taken as a sign by rivals he was intent on taking back full control of policy ahead of elections in 20022.

They said the changes fell short of the reinvention Macron had promised.

"It's a game of musical chairs," Alexis Corbiere, a lawmaker for the far-left France Unbowed party, told BFM TV. "Let's be frank, it's a roadmap for more of the same." 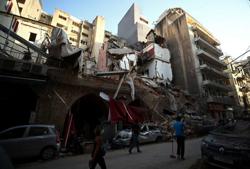