FILE PHOTO: Brazil's President Jair Bolsonaro rides a horse during a meeting with supporters protesting in his favor, amid the coronavirus disease (COVID-19) outbreak, in Brasilia, Brazil May 31, 2020. REUTERS/Ueslei Marcelino

BRASILIA (Reuters) - One of the world's worst coronavirus outbreaks, a paralyzed economy sending investors fleeing for the exit, and accusations that he has undermined Brazil's young democracy have not loosened President Jair Bolsonaro's grip on power.

As of Thursday, Brazil had nearly 615,000 confirmed coronavirus cases, second only to the United States. With 34,021 COVID-19 fatalities, its death toll overtook Italy's.

Across the political spectrum this week, lawmakers in Brasilia have decried the far-right leader's defiance of public health experts on the outbreak and his campaign to end state quarantine measures, which he has criticized for hurting the economy.

They have also raised concerns about his threats to institutions. Bolsonaro has vocally backed his militant supporters who have called in the streets for the military to shut down Congress and the Supreme Court, which has been investigating him and his followers.

More than 30 motions have been presented in Congress to impeach Bolsonaro for trampling on Brazil's constitution, mostly from leftist opponents.

But Bolsonaro's position is safe for now, four politicians told Reuters this week.

They said he has courted enough lawmakers in Congress with key appointments to fend off the threats of impeachment. Many now fear such a move would be a badly timed distraction from the growing health crisis.

"Bolsonaro has artificially stirred confrontation between Brazil's democratic institutions, but my party is not seeking his impeachment because we cannot contribute to more instability in this unprecedented crisis," said Bruno Araujo, president of the Brazilian Social Democratic Party.

Araujo said Bolsonaro will be judged by Brazilian voters at the next presidential election, set for 2022.

"Until then we will lurch from crisis to crisis, from outburst to outburst by this authoritarian president," he said in an interview.

The Speaker of the House, who would decide to put an impeachment to the vote, has also said Brazil needs first to unite in fighting the coronavirus outbreak and he did not want to put "more wood on the fire."

Bolsonaro has said his aims are democratic and those seeking to undermine his government are the greatest threat to Brazil's constitution. Last week, he said the Supreme Court was threatening to "plunge Brazil into a political crisis" with its investigations.

One inquiry is looking into the financing of his supporters' alleged disinformation campaigns on social media. Another is investigating if Bolsonaro interfered illegally in police appointments for personal reasons. Bolsonaro says his supporters and family are being unfairly targeted and that the accusations are untrue.

Felipe Rigoni and Nelson Trad, centrists on the left and right of the aisle in Congress, said Bolsonaro had deliberately fueled tensions by joining his supporters' anti-democratic rallies, turning off moderate voters who backed him in 2018.

Still, the atmosphere of conflict plays well with his core supporters, both lawmakers said. Although rejection of his government has climbed, as many as a third of voters remain loyal, opinion polls suggest.

The constant confrontation has distracted attention from the severe public health and economic crises assailing the country, Rigoni said.

Investment banks are forecasting that the economy will contract up to 7.7% this year. Investors rattled by the depth of the recession and the government handling of the pandemic have pulled over $31 billion out of the country this year, according to Central Bank data. The Treasury said foreigners reduced their holdings of Brazilian bonds in April to the lowest since 2009.

If the recession and investigations into Bolsonaro get bad enough to erode his support, the tide in Congress could eventually turn toward impeachment, said center-left lawmaker Tabata Amaral.

"For now, he needs continuous ideological warfare to stay in power, by creating new crises and new enemies every day so that people don't see what's happening right in front of our faces," she said. 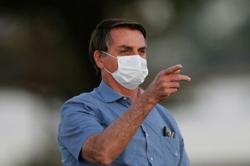 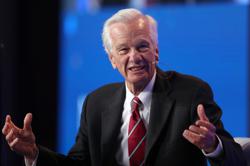 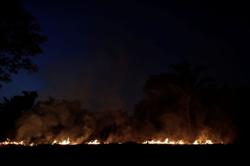