DHAKA (Reuters) - An elderly Rohingya refugee has become the first person to die from coronavirus in the camps in southern Bangladesh, officials said on Tuesday.

The man, aged 71, died on May 31 while undergoing treatment at the camp's isolation center, said Bimal Chakma, a senior official of the Refugee Relief and Repatriation Commission.

"Today we got the confirmation that he tested positive for COVID-19," he said.

At least 29 Rohingya have tested positive for the virus so far since the first case was detected in the camps on May 14. Officials said 339 tests have been conducted among Rohingya in the camps so far.

Aid workers have warned of a potential humanitarian disaster if there is a significant outbreak in the refugee camps outside Cox's Bazar, the coastal district where the camps housing over a million Rohingya - members of a mostly Muslim minority who fled a brutal military crackdown in Myanmar - are located.

"We are all working round the clock to ensure that testing is available to refugees," said Louise Donovan, spokesperson for U.N. refugee agency UNHCR in Cox's Bazar. "Those who are identified as COVID-19 positive have adequate facilities in place to care for them, and to ensure contact tracing and isolation of those who may have been exposed."

As many as 60,000 to 90,000 people are jammed into each square kilometre, with families of up to a dozen sharing small shelters.

"Once the virus takes hold, it will be incredibly challenging to flatten the curve, so we are gravely concerned the numbers needing treatment will soon be overwhelming." 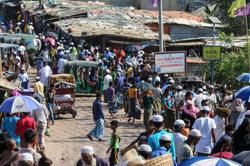 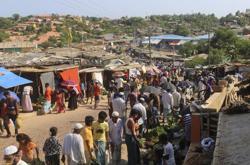