Men, who are suspected of taking part in a recent armed conflict between representatives of transportation companies in the town of Brovary, are detained by Ukrainian police officers in Zhytomyr Region, Ukraine May 29, 2020. Press Service of National Police of Ukraine/Handout via REUTERS

KIEV (Reuters) - Dozens of people, some armed with what appeared to be hunting rifles, clashed in broad daylight on Friday in a residential suburb outside the capital Kiev, and at least three people were wounded, according to officials.

The violence, captured in amateur footage taken from surrounding apartment blocks and posted online, occurred in the morning in Brovary.

According to Interior Minister Arsen Avakov, about 100 people took part in the clashes, some of whom came from another region.

The footage, which Reuters could not immediately verify independently, showed men in masks and dark clothes exchanging fire with hidden adversaries who were obscured by trees. Reuters counted around 40 shots.

President Volodymyr Zelenskiy urged the government to investigate in incident and punish those responsible, the presidential press service said.

"The head of the interior ministry reported to the president that the conflict occurred between representatives of companies involved in passenger transportation in Brovary," it said in a statement.

The interior ministry said that the head of police in the region of Vynnytsya, where some of those who took part in the clashes came from, had been sacked. It was not clear whether the two were related. 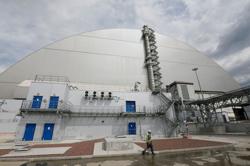 Fires near Chernobyl make Kiev air most polluted in world