Residents of the Las Victorias neighbourhood, most of them informal sellers, wave white flags as a sign asking for food, since the government suspended the movement of people due to the coronavirus disease (COVID-19) outbreak, in Soyapango, El Salvador May 19, 2020. REUTERS/Victor Pena

GUATEMALA CITY/SAN SALVADOR (Reuters) - Strict coronavirus lockdowns in Guatemala and El Salvador have so battered local economies that hundreds of families are flying white flags outside their homes or waving them in the street: not in surrender, but to seek food and assistance.

After 50 days of lockdown that has snuffed out their livelihoods, Ana Orellana and three neighbors put up a white flag and a sign asking for food on the graffiti-scrawled concrete boarding house they share in central San Salvador, the capital of El Salvador.

Orellana, a street vendor of coffee, said that since the government ordered people to stay home in March, she has had no income to pay for food or the $75 monthly rent on the room she inhabits alone in the building. Now she takes turns with her neighbors to scavenge throwaway food at a city market.

"I go looking through the bins where the rubbish is," the 51-year-old said. "I go to the Tiendona market to get stuff, because we really don't have tomatoes or onions now, and we make a tomato stew here without oil, just parboiled."

Alongside the white flag is a misspelled sign over a boarded up window saying "we were not beneficiaries" to signal they did not receive a $300 voucher issued in March by President Nayib Bukele to 1.5 million poor families, about three-quarters of the population.

The bleak outlook for Orellana and her companions extends deep into Central America and much of Latin America, where the pandemic threatens to worsen chronic poverty among the millions of people who live hand-to-mouth.

Food protests have broken out in countries including Venezuela and Chile. El Salvador and neighboring Guatemala, two of the poorest countries in the Americas, have borne some of the strictest quarantine measures.

In towns and villages across the two countries, hundreds of signs have gone up asking for food, and people have taken to the streets to wave white flags in distress.

Food parcels from the national government and donations from ordinary people have helped to alleviate some of the want, but resources are stretched.

"We're worried about the virus and food, because if the virus doesn't kill us, hunger will," said Jose Rodriguez, 69, a street vendor who lives in another San Salvador boarding house with 100 other people. "We desperately need things to eat."

Guatemala's government says it has delivered nearly 190,000 food boxes to over 1.2 million people, about 7% of the population. In El Salvador, security forces began handing out 1.7 million bags of food to the poor on Sunday.

After Guatemala's government erected the first sanitary cordon around the impoverished municipality of Patzun on April 5 to contain the virus, hundreds of cut-off residents began putting up rags and white cloths in a call for help.

Pictures of the houses festooned with white signs began to circulate on social media, and the phenomenon soon spread to other parts of Guatemala, and eventually, El Salvador.

"We put it out because we need food," she said, "because we have nothing to give our children, and can't pay for our room."

A color coding system has developed in Guatemala. Red flags indicate medicines are needed, black alert the police to violence, and yellow ones to attacks on children.

Guatemala has reported 45 deaths and 2,265 infections from the virus, while El Salvador has confirmed 32 fatalities and 1,640 cases. Neighboring Honduras, where the poor have also gone out to beg for food, has registered 3,100 cases and 151 deaths.

Traditionally, those who see no future for themselves in the three countries, which have long been plagued by violence, have emigrated to the United States by any means possible.

Maria Jauria, a 21-year-old housewife and mother of two living in the central Guatemalan department of Chimaltenango, said there was so little work that her bricklayer husband has had to start selling the very things he needs for his job.

"We've been going out with the white flags for a month, and yes, some people have helped us out with food," she said. "But the truth is, my husband has been selling his tools so we have something to eat." 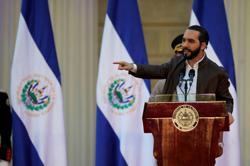