ALOR SETAR: Some 100 PKR members in Kedah announced that they are leaving the party with immediate effect.

"This will be the second wave of PKR members leaving from the party after their disappointment towards party president Datuk Seri Anwar Ibrahim," said Lunas assemblyman Azman Nasrudin at a press conference at Kubur Panjang, Pendang on Saturday (May 16).

He said the decision to leave the party was due to discontent with the party leadership under Anwar, unlike during the time of former PKR president Datuk Seri Wan Azizah Wan Ismail.

"We could still manage the party when Wan Azizah led us, although there was some difference of opinion," he said, adding that the leadership of Wan Azizah brought the party to victory during GE14.

Azman, who quit the party on May 12 together with Sidam assemblyman Dr Robert Ling Kui Ee, said those who left the party on Saturday were divisional party leaders from the state.

Azman, who is also the Kedah Penggerak Komuniti Negara chairman, said he expected up to many more members to leave the party soon.

He said members who left the party would be joining Penggerak Komuniti Negara, an NGO founded by former PKR leader Zuraida Kamarudin.

Those who left the party are the key PKR leaders in their respective divisions. 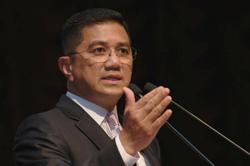