It was a humiliation for Prime Minister Viktor Orban, who invokes Christian values and has criticised Western society for its relaxed morals.

A former Olympic gold medallist in gymnastics, the 54-year-old married father of two went incommunicado in the days leading up the vote and has apologised to his family.

He is widely expected to be expelled from Fidesz in an effort to contain the damage to the party's image.

As party chairman, Orban will make the final call. Expect retribution to be swift. – Bloomberg 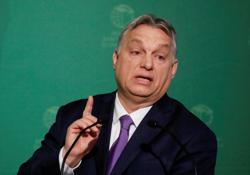 The future of Europe could be decided in Poland