BANGKOK (Reuters) - Thailand's 86-year-old Queen Mother Sirikit is being treated for influenza at a Bangkok hospital, the Royal Household Bureau said in a statement on Monday in a rare statement on her health.

Sirikit, who was queen consort to the late King Bhumibol Adulyadej, who died in 2016 after seven decades on the throne, is mother to the current King Maha Vajiralongkorn, 66.

The queen has seldom been seen in public in recent years but last week the palace released photographs of Sirikit to mark her 86th birthday on Aug. 12. The queen was pictured with several of her children, including King Vajiralongkorn.

Sirikit was admitted to Bangkok's Chulalongkorn Hospital on Sunday after developing a high fever and cough, the bureau said.

The queen's condition has improved, the statement added, but she will remain in hospital under observation.

Many national holidays in Thailand revolve around the royals. Sirikit's birthday is also celebrated at Mother's Day. 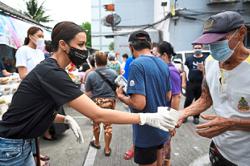