(Reuters) - Some European companies are rethinking their strategies to cushion the impact of trade tensions between the world's two biggest economies, the United States and China.

The United States has finalised the next China tariff list targeting another $16 billion (£12.4 billion) in imports as of Aug. 23, the U.S. Trade Representative's office said.

China is slapping additional tariffs of 25 percent on $16 billion worth of U.S. imports from fuel and steel products to autos and medical equipment, the Chinese commerce ministry said on Wednesday, also activating them on Aug. 23.

In the case of China, Trump threatened that he was ready to impose tariffs on an additional $500 billion of imports. The United States has already imposed tariffs on $34 billion of Chinese imports. In return, China has levied taxes on the same value of U.S. products.

Below are recent comments from European companies on trade tensions:

** France-based electronic equipment manufacturing company Actia Group maintains its goal of moderate growth in 2018; however says the tensions may limit the increase in profitability year-on-year.

** Russian steelmaker MMK has delayed the launch of a project in Turkey, which was expected to add $90-$100 million to its core earnings, due to uncertainty created by global trade wars, the company said.

** Siemens Healthineers plans to cushion the impact of U.S.-China trade tensions by changing its supply routes to ship goods from its European factories.

** German automaker BMW started building its X3 model in China, ending its imports from the company's plant in Spartanburg, South Carolina, and raised prices on the X5 and X6 models to compensate for the tariffs.

BMW still exports some X5 models from U.S. to Asia, but it is reviewing ways to optimise its flexible production network to adapt. The company said earlier that it would be unable to "completely absorb" a 25 percent Chinese tariff on imported U.S.-made models.

** China-based car dealers said Mercedes maker Daimler moderately raised prices in the country of its GLE midsize SUV which is produced in Alabama.

Daimler is looking at ways to mitigate the impact of the trade tensions, including reviewing whether to shift some U.S. production to Asia. The company blamed tariffs for a 30 percent drop in second-quarter profit.

** Wind turbine maker Siemens Gamesa warned that trade tensions would drive up U.S. costs by 2 to 4 percent, depending on the product and whether further tariffs are imposed. The company is working to reduce the impact on margins by optimising its supply chains.

** French electrical equipment company Schneider Electric foresees growth slowing in the second half of the year and expects the first extra costs linked to higher U.S. tariffs, which could reach 20 million euros.

** "If the trade war escalates we are more concerned about the consequences that it can have on global macro environment," STMicro said, adding that the direct impact of trade war risks were currently negligible.

** Fiat Chrysler cut its 2018 outlook, hurt by a weaker performance in China. Its operating profit for the second-quarter was negatively impacted by China import duty changes.

** Philips confirmed its sales growth target for this year but added that trade worries and the consequences of Brexit continued to cause uncertainty.

** Finnish steel maker Outokumpu sees a double impact from the U.S. tariffs, with surging imports to Europe resulting in heavy price pressure, whilst in the Americas base prices have risen, benefiting local manufacturers itself.

** Chinese-owned Volvo Cars said it was shifting production of its top-selling SUV production for the U.S. market to Europe from China to avoid Washington's new duties on Chinese imports.

** The Alliance of Automobile Manufacturers, whose members include General Motors Co, Volkswagen AG

** Sweden's Electrolux said U.S. tariffs announced in July would have an impact of $10 million plus this year. In the third quarter. It expects raw material costs to rise by 0.5 billion Swedish crowns.

** Swedish lock maker Assa Abloy sees a further increase in steel prices in the second part of the year in the U.S., partly due to new import tariffs.

** Austrian steelmaker Voestalpine said about a third of its U.S. sales would be impacted by import tariffs, adding it was talking to its customers about who would bear the cost.

** Norway's REC Silicon booked an impairment charge of $340 million "due to the market disruption from the curtailment of solar incentives in China, as well as continued trade barriers that prevent access to primary markets inside China". 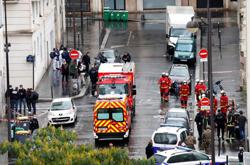