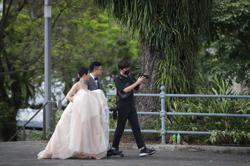 After a two-year legal battle, the dispute between a photographer and an animal rights group over a "monkey selfie" has come to a close.

British photographer David Slater has won the appeal against People for the Ethical Treatment of Animals (Peta) over the copyright of the photograph, which was taken by a seven-year-old rare crested macaque named Naruto.

The animal, which lives on a reserve in Indonesia, had used Slater's camera to take several photographs, including several selfies, in 2011.

After the monkey's selfie went viral, Peta filed a suit in 2015 against the photographer on the macaque's behalf, arguing that it should be declared the owner of the photo and receive damages for copyright infringement that would be used for habitat preservation.

But while the animal had pulled the trigger, a judge in the United States ruled in January last year that it cannot own the copyright to the photograph because it is not human.

Peta then filed an appeal against the ruling, but it was recently dismissed as both parties have reached a settlement, said the animal rights group on their website on Monday.

On Tuesday, lawyers for Peta said that Slater has agreed to donate a quarter of any future revenue from selling the photograph.

The funds will go to registered charities "dedicated to protecting the welfare or habitat of Naruto", said both parties in a joint statement, reported the BBC.

Peta also said it would continue to establish legal rights for animals.

"Everyone deserves the rights we hold dear: to live as they choose, to be with their families, to be free from abuse and suffering, and to benefit from their own creations," said the animal rights group on its website. – The Straits Times/Asia News Network