JAKARTA (Reuters) - Indonesian police have arrested a man they suspect hacked into an advertising company's computer system to show a pornographic video on an electronic billboard at a busy intersection of south Jakarta last week.

A police officer cut the power supply to the billboard after the sexually explicit film had run for five minutes, but by then pictures and videos of the clip taken by amused motorists had already been widely shared on social media.

Indonesia, a predominantly Muslim country, has a strict censorship policy. Sex and kissing scenes are cut from movies and television shows, and pornographic sites are blocked.

Setiyono said a 24-year-old was arrested on Tuesday at his office in South Jakarta, where he works as an IT analyst.

Police found the suspect after the cyber-crime unit traced an IP address connected to the billboard. The suspect said he had hacked into the system as a prank after seeing log-in details shown on the billboard, Setiyono said. 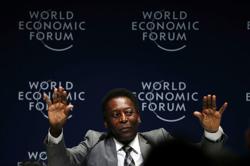