NEW DELHI (Thomson Reuters Foundation) - A lawmaker in India's beach state of Goa has been charged with buying, drugging and raping a 16-year-old girl in a case which will be closely watched by anti-slavery activists as the country moves to crackdown on human trafficking.

Atanasio Monserrate, an independent legislator in Goa's assembly, was detained on Thursday after the teenager told police she was sold to him by her mother and another woman.

The former Goa education minister may be one of the first Indian lawmakers to be charged under recently enacted human trafficking legislation, said police on Friday.

"We have charged him with various offences. These include drugging, sexual assault of a minor and trafficking," a police officer involved in the investigation told the Thomson Reuters Foundation by phone from Panaji, Goa's capital.

"I don't have the figures, but yes, this could be one of the first MLAs (Member of the Legislative Assembly) charged under Section 370 which deals with human trafficking."

The crime branch officer, who did not wish to be named, said Monserrate, a former member of main opposition Congress Party, has denied the charges and says conspiracy against him has been hatched by his political opponents.

The girl, who is from St Cruz - the constituency which Monserrate represents - told police her mother sold her to work for him, but that he kept her confined, gave her drinks laced with drugs and raped her several times.

Police did not disclose the amount she was sold for, but local media reported the teenager had cited a figure of five million rupees ($75,000) in her statement to police.

Her mother has also been charged under the human trafficking law and is currently being questioned and a search is on for the second woman, said police.

India is home to more than 14 of the world's 36 million victims of slavery, ranging from bonded labour to prostitution, according to the 2014 Global Slavery Index.

Activists in Goa estimate thousands of women and children from Nepal, Bangladesh, Thailand and from other Indian states are duped by traffickers into the western coastal state, famed for its palm-fringed beaches and night life.

Many end up being exploited in brothels fronted by hotels, beauty salons, spas and bars or used in forced labour such as domestic work or in the hospitality industry.

Section 370, which was enacted after the fatal gang rape of a young woman on a New Delhi bus in December 2012, broadens the definition of trafficking to include the buying or selling of a person as a slave and carries a jail term of up to 7 years.

National Crime Records Bureau data shows that in its first year, 720 cases out of a total of 5,466 human trafficking-related cases were registered under Section 370 in 2014.

But activists say this is a gross under-estimation of the scale of the problem and have welcomed government moves to draft more comprehensive legislation by the end of the year.

This will not only unify several existing laws including Section 370, but also raise penalties for offenders and provide victims with rehabilitation and compensation.

The legislation also provides for the establishment of a central investigative anti-trafficking agency to coordinate and work between states as well as special courts to hear cases.

"Certainly this case is a test case because the person is a powerful politician. The investigation should be very precise and rely more on scientific and circumstantial evidence," said Ravi Kant from Shakti Vahini, a Delhi-based anti-trafficking charity.

"Protection to witnesses in this case will be a big challenge for the prosecution. It has been seen that in cases involving powerful people, the victim and other witnesses can turn hostile." 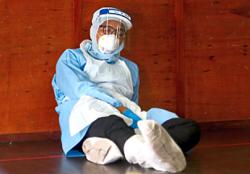