LESBOS, Greece (Reuters) - The young Syrian woman beamed with relief: She had just been fingerprinted, photographed and granted permission to stay in Greece for six months to apply for asylum.

But Bushra had no intention of doing so, any more than thousands of other refugees and migrants registered that day on the island of Lesbos at Greece's first and only EU-assisted centre for processing arrivals from Turkey.

She and her mother, who arrived that morning on a packed rubber dinghy, planned to take the next ferry to the Greek mainland and from there continue their journey, by bus and on foot, through the Balkans and on to Germany.

"It's better there. We left because of the war," said 20-year-old Bushra, her black boots still wet from the trip. Her mother, her face framed by a black headscarf, drew on a cigarette and smiled.

Reuters was given access to the reception centre on condition it did not photographs or use the full names of asylum seekers to protect their identities.

More than 750,000 of the 900,000 migrants who have arrived in Europe this year landed in Greece, 60 percent on Lesbos. The so-called "hotspot" is one of five such centres Greece has promised the European Union it will establish on its islands by the end of the year, part of measures to manage the refugee crisis.

The aims of the hotspots include identifying genuine asylum seekers and those eligible for the EU relocation programme, created to share among member states a refugee burden that has fallen heavily on Greece and Italy.

But the Lesbos hotspot - inaugurated in October - has had little or no success in managing the flow of refugees into Europe, as most arrivals like Bushra have no intention of seeking asylum and entering the EU bureaucratic system, instead preferring to take their own chances.

In September, EU leaders approved the transfer of about 160,000 asylum seekers from Greece and Italy under the programme, but a mere six families have been relocated from Greece to Luxembourg since.

That is just 30 people out of the 66,000 that European states have promised to take from Greece.

"We encourage them to stay and apply (for asylum)," said Boris Cheshirkov, a spokesman with the United Nations refugee agency UNHCR on Lesbos. "They're determined to move."

On Wednesday, UNHCR transferred 17 busloads of soaked and exhausted people to the hotspot after they had survived the three-hour boat journey from Turkey and arrived on beaches south of the island between midnight and 10 a.m. That was a fraction of the numbers arriving on days in the summer.

On such quiet days, the 24-hour Lesbos operation runs smoothly at the disused military camp on a hill several kilometres from the coast. The queues are long but orderly and the entire procedure lasts at most a few hours.

Taking eight-hour shifts, 39 officers of the EU's Frontex border management agency, including interpreters, work with Greek colleagues to interview and fingerprint new arrivals. Frontex did not respond to requests for an interview.

For 60-year-old Reza, who fled Afghanistan with his family, the most treacherous part of the journey was over.

"It was not good. Very dangerous," he said of their 12-week ordeal through Iran and Turkey before boarding a boat to Lesbos with dozens of other people. "Now Europe will help us."

About 2,000 people were successfully registered at the camp on Wednesday, according to Antonis Gagarelis, a police officer who oversees the operation.

Newcomers queue up based on nationality: Syrians, Iraqis, Somalis, Palestinians, Yemenis, South Sudanese and Eritreans are allowed to stay in Greece for six months on "humanitarian grounds". The rest, including Afghans, Pakistanis and Iranians, get a 30-day notice to leave the country.

In small, nondescript, pre-fabricated offices, arrivals are interviewed to determine their nationality, debriefed, digitally fingerprinted and handed a temporary authorisation document, an A4 sheet of paper with their photograph and travel restrictions in Greek.

Children who arrive alone are detained and placed under 24-hour police guard, playing basketball behind barbed-wired gates. They wait up to 15 days in case relatives turn up before being moved to Athens and given access to Greece's underfunded child-protection services.

All others are left to their own devices. Greece's left-wing government shut down migrant detention centres long-criticised by rights groups as inhumane when it came to power in January.

Those who can afford the 60-euro ($65) ferry ticket to Athens get on their way. At the island's picturesque, cafe-lined port, groups of men wait patiently on benches, their few worldly belongings in backpacks.

On Thursday, more than 4,300 refugees and migrants landed at Greece's main port of Piraeus near Athens, most from Lesbos.

For those still at the hotspot, food, shelter and toilets are provided by UNHCR and Greek and international non-governmental organisations. The charitable foundation of a large mobile phone company has set up a tent providing free internet access and phone-charging stations.

Most sleep in 68 hard tents set up by UNHCR while they wait, either for relatives to join them, or to borrow or be sent money to buy a boat ticket. Flimsy makeshift tents have also been erected outside the police-guarded compound.

As night falls and temperatures drop to about 6 degrees Celsius or lower, groups of people huddle among piles of suitcases, burning pieces of cardboard to keep warm. The dusty plot of land turns to mud each time it rains.

As winter sets in, arrivals to Lesbos have fallen to 2,000 a day from up to 10,000 in the summer but the island remains the main entry point into the EU, to the dismay of Athens' European partners.

Antonis Sofiadelis, head of coastguard operations in Lesbos, said unless more was done in Turkey to register and screen people seeking asylum in Europe, the coastguard would need help in terms of staff and vessels to keep up with the flow across Greece's vast, porous sea border.

"The point is to not have people risking their lives (to cross the sea). It is extremely dangerous and managing the problem would be much easier on land," he said.

Despite improvements at the hotspot, Greece has been urged to do more by its EU peers and international organisations.

"Conditions are still not at the standards that they need to be, not even at the minimum standards," UNHCR's Cheshirkov said.

More staff, offices and shelters are needed to expand the reception capacity, with EU help, and encourage arrivals to participate in an EU relocation programme worthy of the name, he said.

"(Greece) can't be expected to deal with everything on its own. It's not tenable," he added.

While there has been a rise in the number of people applying for asylum from the hotspot in recent weeks, few are of nationalities deemed eligible for the relocation programme - those from Syria, Iraq, Central African Republic and Eritrea. Most simply head to Greece's northern border.

There, many become stranded at the frontier by western Balkans countries' policy of filtering those allowed to pass based on nationality. Thousands are forced by the Greek government to return to Athens and told they have 30 days to leave the country.

Meanwhile, thousands more arrive on the islands every day. 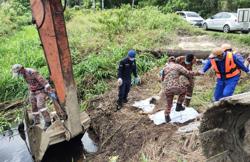