MAIDUGURI, Nigeria (Reuters) - Suspected Boko Haram gunmen kidnapped 172 women and children and killed 35 other people on Sunday during a raid on the northeast Nigerian village of Gumsuri, residents said on Thursday.

Although no one has claimed responsibility, the attack bore the hallmarks of Boko Haram, which abducted more than 200 women in April from a secondary school in Chibok, only 24 km (15 miles) from this latest attack.

The campaign for an Islamic state by Boko Haram, whose name means "Western education is sinful," has become the gravest threat to Africa's biggest economy and top oil producer.

Village resident Abba Musa, a maize grinder who survived the attack, estimated the number abducted as 172 after the village did a head count following the assault.

The attackers shouted "God is Great" and unleashed salvos of gunfire, he said.

"My sister and her seven children were among those taken away," he told Reuters by telephone. "We ran into the bush and were lucky. There were not many others who were lucky."

He said at least 33 were killed.

Thousands of people have been killed and many hundreds abducted, raising questions about the ability of security forces to protect civilians, especially around the north Cameroon border where the militants are well established.

"The government is outraged and deeply saddened by this deplorable act," government spokesman Mike Omeri said in a statement. "Boko Haram continues to choose, ever cowardly, to target civilian populations to spread their brand of terror."

He estimated deaths at 17 but said the numbers abducted could not yet be reliably ascertained.

Maina Chibok, who did not witness the attack but is from Gumsuri and visited family there shortly afterwards, said the insurgents carted away their victims on open-topped trucks.

News from remote parts of Nigeria that are cut off from mobile communications sometimes takes days to emerge.

A security source confirmed that more than 100 had been abducted and 35 people killed, including the district head.

"They also burnt down a government medical centre, houses and shops," Chibok said.

The abductions have increased in frequency this year. A man who says he is Boko Haram leader Abubakar Shekau last month rejected comments by the government that it was in talks to free the Chibok girls, saying he had in fact "married them off" to Boko Haram commanders, in a video posted on the Internet.

Aliyu Mamman, a young vigilante from the area, told Reuters by telephone that there was no security presence to stop the militants, who stayed in the town all night before leaving.

Nigeria sentenced 54 soldiers to death for mutiny in the northeast on Wednesday.

On Wednesday, Cameroon's army killed 116 Boko Haram militants when they attacked a base in the Far North region of the country, the Defence Ministry said on Thursday. 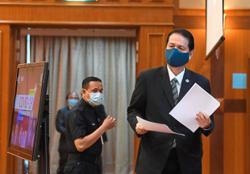