HONG KONG (Reuters) - Australia's top central banker on Monday said the economy was not doing too badly but further restructuring would be needed to boost productivity, something that was outside the scope of monetary policy.

Reserve Bank of Australia (RBA) Governor Glenn Stevens also cautioned that Europe's debt problems were still a risk to the global economy, but remained upbeat on the outlook for China and the rest of Asia.

Speaking to a conference in Hong Kong, Stevens noted that recent Australian data on gross domestic product (GDP) suggested the economy was running more slowly than expected. But other figures, such as business surveys, pointed to growth around the historical trend of 3.25 percent to 3.5 percent.

"Overall, recent economic performance in Australia is not too bad, particularly when compared, over a run of years, to a number of other advanced economies," said Stevens.

He saw scope for improvement through measures to boost productivity, rather than via lower interest rates.

"Monetary policy can play a role in supporting demand, to the extent that inflation performance provides scope to do so. But monetary policy cannot raise the economy's trend rate of growth," said Stevens. "That lies in the realm of productivity-increasing behaviour."

Neither could monetary policy relieve the pressure for restructuring in sectors hit by the high Australian dollar, such as manufacturing and tourism, he said.

The central bank has left rates steady at 4.25 percent for its last two monthly policy meetings, having eased by half a percentage point over November and December.

Earlier this month, Stevens said rates were at the right level to deliver trend economic growth and contain inflation.

Since then, however, government data on GDP had shown the economy grew a sluggish 0.4 percent last quarter, half the pace that analysts had hoped for.

Stevens said Australia had become a safe haven to foreign investors which were keeping bond yields down and making it cheaper for the government, and much of the private sector, to borrow.

"A greater flow of cheaper capital to a country is an advantage," he said.

At the same time, this inflow of funds was adding to the upward pressure on the Australian dollar and making life harder for sectors struggling with foreign competition.

It was possible, he said, that the dampening impact of the high dollar could outweigh the expansionary effect of a lower cost of capital, at least for a time. 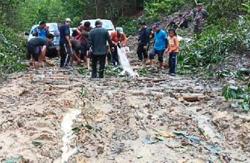