Drawn by a disaster of biblical proportions, religious groups flocked to the tsunami zone to give succor to the survivors, and tried to provide answers to those who wondered about god's role in the sudden, extraordinary event.

The unprecedented tsunami, spawned by the strongest earthquake in four decades last Dec. 26, did not discriminate: Muslims were swept away in Indonesia, Hindus carried off in India, Buddhists deluged in Thailand. Catholics and Jews visiting Indian Ocean resorts from Europe and America, were also killed.

Faith-based charities were among the first to come and are among the last to leave, performing the corporal works of mercy: feeding the hungry, clothing the naked, sheltering the homeless, healing the sick, burying the dead.

"Church-based and religious-based groups have more dedicated workers," said Sufi Pore, who heads the Indian Jain Organisation's tsunami projects in the Andaman and Nicobar Islands and who is himself a Sufi Muslim. "We need people who will come six, nine months with some dedicated zeal."

Most faith-based groups try to keep their religious affiliation firmly in the background.

U.S. tele-evangelist Jerry Falwell was one notable exception, stirring controversy in January when he appealed for money and volunteers to go to tsunami-struck areas to distribute food, medical supplies and "thousands of Gospel tracts in the language of the people", according to his Web site (www.falwell.com).

It's about compassion, not conversion for most faith-based aid groups.

That's important in places like the Indonesian province of Aceh, where Islamic law is practiced and religion is a highly sensitive issue. Students staged street protests several months ago over rumours a Christian group had distributed pills stamped with Mother Mary's image.

Taiwan's Buddhist Tzu Chi Foundation, which has been supplying tent camps in Aceh with food, water and other supplies, has plans to rebuild villages -- including homes, mosques and schools -- at an estimated cost of $27 million.

"As we all live on the same planet and breathe the same air, we are family," Tzu Chi founder Chen Yen said on the group's Web site (www.tsuchi.org). "When disaster strikes one region, everyone, everywhere ought to help."

One Christian evangelical group says it is getting its message across in a more subtle way.

"Everyday, they're going to wake up and know a group of Christians built a house. That's pretty heavy evangelism. It's like St. Francis of Assisi said: 'Everywhere you go, preach the gospel. And if you must, use words.'"

Dave Johnson brought his wife and two teenage daughters to a temporary camp in Ban Nam Khem, Thailand, from a Bruderhof community -- a tiny offshoot of the Mennonite Amish -- in Rifton, New York. They came with nothing but the clothes on their back and a few cans of food to teach English to tsunami camp dwellers.

"We definitely did not come here to proselytise," Johnson said in the tiny, one-room corrugated tin hut he planned to live in for the next two years. "We found more Christianity in Thailand through deeds than in most places we find."

Buddhist Thailand generally takes a relaxed view of missionaries and in southern Thailand some Christian groups are actively trying to recruit souls.

"They needed peace in their heart," Achara said, "and asked questions about god. They started praying and received answers from god and realised god is real."

Standing on a beach at Batticaloa, Sri Lanka, one pastor voiced what some evangelical Christians were saying about the Dec. 26 catastrophe that killed more than 231,000 and displaced around 1.8 million people in a dozen Indian Ocean nations.

"It was a sign that these are the last days. You must prepare yourself to meet Jesus Christ. Repent for your sins."

Some tsunami survivors wondered if god was angry: why did the horrific quake and monster waves strike their communities and not others? Why take the children?

Some Islamic preachers in Aceh blamed the disaster on morals becoming too lax.

Throughout tsunami-struck areas fishermen are still terrified of going back to the sea, children are having nightmares, women who lost children are depressed or even suicidal, and psychosomatic illnesses are common, aid workers say.

A number of religious groups, including the Philadelphia-based Hope Foundation, are conducting counselling programmes in tsunami areas.

The Church of Scientology, which counts actors Tom Cruise and John Travolta among its members, was among the first on the scene to do trauma counseling. Teams of scientologists were sent to Indonesia, Sri Lanka, India and Thailand, where they used mind-over-matter healing techniques the group calls "Assists". 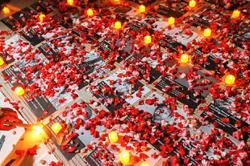