GEORGE TOWN: Police here have debunked security camera footage of a snatch theft, saying that it was captured in Los Angeles in the United States and not Penang as some have claimed.

"Our investigations revealed that the incident happened at a mall in San Gabriel, Los Angeles and not George Town," he said in a statement on Saturday (July 10).

The incident happened at a grocery store in San Gabriel Square at about 8.40am on June 26.

The video was released by the San Gabriel Police Department a day after the incident.

ACP Soffian advised the public to refrain from sharing or spreading any unverified videos or information and not to jump to any conclusions.

However, he said the public could learn from the incident and always be wary of their surroundings and not give any opportunities to criminals to commit crime. 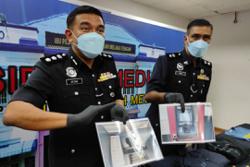