SEREMBAN: Health authorities here have denied a news report claiming that 8,000 residents in Sendayan have been told to undergo Covid-19 screening.

State health director Datin Dr Harlina Abdul Rashid on Wednesday (April 15) said only those who had come in close contact with individuals who have tested positive in the township recently needed to come forward to be tested.

"There is an article which has gone viral via twitter written by a broadcast journalist claiming that some 8,000 residents in the area would have to undergo testing after we found a new cluster there.

"We would like to state that only residents asked by us to come forward for screening should do so.

"It is our hope that the media fraternity run only the reports issued by the Health Ministry because unverified reports could create panic," she said in a statement.

She also urged residents in affected areas not to spread unsubstantiated reports.

Dr Harlina said the public can call the state Crisis Preparedness and Response Centre at 06 766 4940 to verify any information.

Earlier on Wednesday, Health director general Datuk Dr Noor Hisham Abdullah said 39 positive cases had been detected in the new cluster in Sendayan including 13 tahfiz students and 11 people from a family. 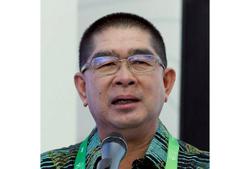 No, Maximus Ongkili did not suffer a stroke, says his aide