TAIPEI, May 20 (The China Post/ANN) — President Tsai Ing-wen took the oath of office on Wednesday and began her second term as Taiwan’s first female president.

She was sworn in in a simple ceremony at the Presidential Office in downtown Taipei broadcast live on television and social media.

Former Premier Lai Ching-te was also sworn in as vice president, succeeding Chen Chien-jen, who stepped down after one term.

Due to the coronavirus outbreak, several foreign dignitaries then congratulated the president on her second term in office in a string of short video messages that showed the extent of the president’s international support.

President Tsai’s inaugural address to officials and members of the diplomatic corps began at 10 a.m. with a focus on peace, parity, democracy and dialogue as the keys to cross-Taiwan Strait relations.

U.S. Secretary of State Mike Pompeo sent Tsai a congratulatory message after her re-election, becoming the first high-ranking foreign official to do so.

Pompeo expressed confidence that the US-Taiwan partnership would continue to thrive under Tsai’s leadership. This is the first time a U.S. Secretary of State has sent a congratulatory message on such an occasion, according to Taiwan’s Foreign Ministry. 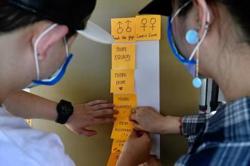 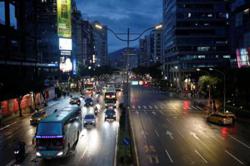