HARBIN (Xinhua): Gao Xiangqiu is locally known as the 'chili queen'.Her Haixing Village-based cooperative has planted over 666ha of chilies in the city of Hailun in northeast China's Heilongjiang Province and has helped many local residents get rid of the poor old days of relying on a meager income from growing corn.

"We could only make several thousand yuan a year by growing maize but now I can earn over 20,000 yuan (about US$2,800) working at the cooperative," said Wang Zhizhong, a local resident.

Wang has entered his fifth year at the cooperative. His family was once trapped in poverty as his wife lost her eyesight, making him unable to work outside the home.

Now, encouraged by Gao, a total of 270 households have engaged in chili growing in the village and the spicy business brings each an additional annual income of at least 12,000 yuan. The annual income of her cooperative, which was established in 2015, exceeded 3.7 million yuan in 2019.

But this year the novel coronavirus epidemic hit Gao off-guard and spoiled her plans to further expand the chilly plantation area. Even when work began to resume on March 4 as the situation eased, the number of farmers back to their posts was far from enough, and the current chili production area is more than 266ha less than the previous year.

This has also made Gao realise the importance of introducing high-end skills and further enlarge planting ranges and varieties.

As a deputy to the National People's Congress (NPC) -- China's national legislature -- she plans to add the voices of local residents and share her ideas on agricultural production in her proposals to be submitted at the upcoming "two sessions" -- the sessions of the NPC and the National Committee of the Chinese People's Political Consultative Conference (CPPCC).

"Soils in Hailun are rich in selenium, which echoes consumers' growing need for a healthy diet. But there are no criteria to define selenium-rich food so I will suggest that relevant departments set up laboratories to promote its research and sustained development," said Gao.

"Great changes have taken place in agricultural development over the years; from 'relying on the weather' to 'relying on hard work and technology, '" said Gao.

"My dream is to help more people reduce their poverty rates and I will stick to that goal and continue to do my part," she said. - Xinhua

HANOI (Vietnam News/ANN): The proposal of temporarily halting the import of petrol and oil must be carefully considered to ensure national energy security and harmonise benefits between producers and consumers, Deputy Minister of Industry and Trade Do Thang Hai said.

In mid-April, the Vietnam Oil and Gas Group (PVN) urged relevant ministries to halt petrol and oil imports to support Dung Quất and Nghi Sơn refineries as domestic sales struggled, resulting in high inventories, sometimes at more than 90 per cent of their storage capacity.

Hai said that the Ministry of Industry and Trade was working with PVN and the Steering Committee on Price Management before making a decision.

Benefits between producers, distributors, consumers and companies which used petrol and oil as inputs, must be balanced and most importantly, any decision made must be to ensure the national energy security.

If petrol and oil imports were halted, this would also affect fuel prices, which might have impacts on enterprises, especially those using petrol and oil as inputs.

Thus, careful consideration must be given, Hai said.

There were 33 companies in Vietnam permitted to import petrol and oil.

In the first four months of this year, Vietnam imported 2.4 million tonnes petrol and oil products, worth US$1.12 billion, representing a drop by 21.6 per cent and 40.6 per cent over the same period last year, respectively, customs statistics showed.

Average import price was $466.3 per tonne, 24.2 per cent lower than the same period last year. 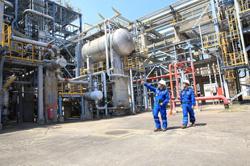