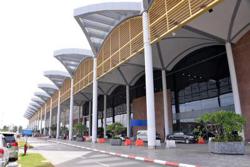 Also included in the sale were five A321 aircrafts with a total liquidation value of $37 million.

In its 2019 audited report, Vietnam Airlines cited difficult operating conditions and stiff competition from home-grown airlines as the main reasons for its decision to sell.

Speaking at a press conference on the SSCA’s progress and implementation plan held at the Office of the Council of Ministers, Chansereyvutha confirmed that authorities had received news of the sale, but did not have any further details.

He said the transaction is currently being done between private equity investors and Vietnam Airlines while state-owned shares remain intact.

However, he said the sale announcement had not changed the airline’s management structure or operations. “So far, the company has retained all of its human resources, changing only the shareholders.”

When asked about the possibility of a government plan to nationalise Cambodia Angkor Air for it to better cope with the Covid-19 pandemic, Chan Sereyvutha stated that the state had no intention of putting the company under direct government control.

He noted that the airline is a mixed public-private joint venture, saying: “Cambodia has an antitrust policy in place, so the company must compete with other companies.”

However, he added that the government may have other ways of helping the company to be sustainable that would not be in violation of the World Trade Organisation’s guidelines for state-owned companies.

Cambodia Angkor Air was established in 2009, eight years after former flag carrier airline Royal Air Cambodge filed for bankruptcy in the wake of the September 11 attacks.

It has a code-share arrangement with Vietnam Airlines and currently operates around 10 domestic and foreign routes.

The Kingdom welcomed a total of 931,826 international tourists in the first two months of this year, down 25.1 per cent from 1.24 million in the year-ago period, said a Ministry of Tourism report.