No new cases reported for second day in a row

FOR the second morning in a row, no new cases of Covid-19 were detected in Vietnam.

This is only the second time the country has recorded no cases in its daily update since March 6.

The results are polar opposites from those released last month. On March 22, a total of 19 people tested positive for the disease, the highest amount detected on one day.

One new case was reported on Sunday evening but the patient, a Vietnamese student who had been studying in the UK, was immediately quarantined upon his arrival.

So far, the amount of people nationwide carrying the virus remains at 241. Of those, 149 are Vietnamese nationals who returned home from overseas and 61 cases are linked to a hospital in Hanoi.

There are 67,273 people in quarantine. Among these, 1,277 people are being monitored at hospitals, 23,922 people are quarantined at centres or other establishments and 42,004 are self-quarantined at home. — Viet Nam News/ANN 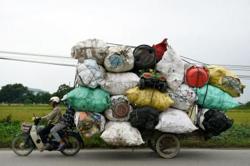