JAKARTA: Three civilians, two of them foreign nationals, were wounded as rebels opened fires at gold and copper mining firm PT Freeport Indonesia in the country's easternmost province of Papua on Monday (March 30).

Ten members of the separatist group, which the government called "the criminal armed group", launched the sudden attack at 2pm local time in the centre of the mining company's administration which is located in Kuala Kencana, Timika, capital of Mimika district, local media reported.

The rebels launched the attack from two sides with long rifle weapons.

Military and police personnel have been in the scene and closed the Kuala Kencana compound. All the victims have been evacuated.

The management of PT Freeport Indonesia has issued an incident notification alert after the attack, requesting workers to halt all activities and immediately find places for protection. 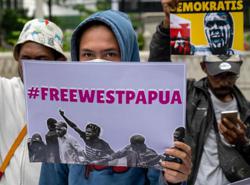