A Tokyo resident looking on as the giant Olympic rings are seen at the waterfront area at Odaiba Marine Park in Tokyo, Japan, on Sundat evening (March 22). More than 55,000 people flocked to a cauldron with the flame that was in display at Sendai Station in Sendai on Saturday. - Reuters

TOKYO: Tens of thousands of people turned out to see the Olympic Flame in the north-eastern Japanese city despite mounting concerns of the coronavirus pandemic, local media reported on Sunday (March 22).

More than 55,000 people flocked to a cauldron with the flame that was in display at Sendai Station in Sendai on Saturday, a day after the flame arrived in the prefecture of Miyagi, local newspaper Kahoku Shimpo reported, though the government repeatedly urged the public to avoid large gatherings to prevent the spread of the novel coronavirus.

Tokyo organisers call it the "Flame of Recovery” as the north-eastern region has spent nine years on reconstruction since it was devastated by the 2011 earthquake and resulting tsunami.

The tsunami devastated the coastal region of the prefectures of Miyagi, Iwate and Fukushima, leaving about 18,400 dead or missing.

A 52-year-old part-time worker told the paper, though she had lined up for the flame for two hours, "I even enjoyed waiting for this.”

When seeing the flame, "I was feeling as if I had been participating in a huge event like Olympic Games,” she added.

About nine years ago, more than 10,000 gathered around the same station during the power outage and spent the restless nights following the tsunami, the paper said.

An 80-year-old housewife in the city of Sendai was quoted by Kahoku Shimpo as saying she could not return home soon after the tsunami nine years ago but that "I’m now so satisfied to see a warming Olympic Flame.”

Saturday’s crowd in Sendai was in stark contrast to a scaled-down ceremony in the city of Higashi-Matsushima on the previous day, when the flame arrived from Greece.

Tokyo Olympic organizers held the event without spectators and decided not to let about 200 school children participate. 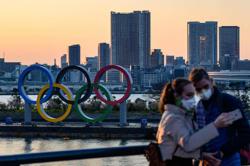 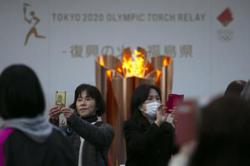