Ranggi Hardiyanto at his athletic shoe store at the Ambassador Mall in downtown Jakarta. - ST/ANN

JAKARTA (The Straits Times/ANN): On any other Monday, Ranggi Hardiyanto, 25, would have already sold at least a couple of pairs of sneakers. But he and an assistant at an athletic shoe store at the Ambassador Mall in downtown Jakarta are standing at the till watching what few shoppers there are pass by.

Sandwiched between Jakarta's busiest thoroughfares, a stone's throw from the Mega Kuningnan business centre, the Ambassador is a fixture for office workers here.

The warren of electronics and clothing stores, pharmacies, and cheap takeaway makes it the go-to place for last-minute errands, a cracked mobile phone screen or even just a coffee.

"This is a popular mall. Normally, it's busy," Ranggi said.

"People are nervous because of corona."

Indonesia is scrambling to contain the outbreak of the coronavirus, which causes the potentially deadly Covid-19.

On Sunday, President Joko Widodo encouraged his countrymen to stay home to avoid catching and spreading the virus.

It's a plea that this capital of 10 million appears to be taking to heart.

Three doors down from Ranggi, Yosep Antonius, 35, said the sudden slowdown reminded him of the uncertainty that surrounded the demonstrations during the late 1990s that toppled former president Suharto.

Yosep, a clerk in a photo shop, specialising in passport photos, would normally ring up roughly four million rupiah (S$380) in sales a day, generating commissions that would match his salary.

But sales have slipped since the first cases of the coronavirus in early March, Yosep said. Last Friday, they barely cleared two million rupiah.

Yosep said that the outbreak will have a big impact on working-class Indonesians like him who live month-to-month with modest savings.

At the MRT station entrance just outside glitzy Plaza Indonesia, Sandi Sibra does his job keeping tabs on how many passengers pass by him and down the stairs to the trains.

Sandi, 22, said his routine is to count passengers in intervals of more than 20 minutes - the time it takes for one train to complete one journey down the 16km train line which opened to the public last year.

But five minutes into the cycle, his handheld counter shows only 16 people have passed by.

"By now it should be about a hundred," Sandi said.

To be sure, residents appear to be taking the outbreak in their stride.

Hand sanitisers are ubiquitous at nearly every check-out counter and receptionist desk. Black-uniformed security guards of office and apartment buildings take temperature readings of visitors. Despite some instances of panic buying, instant noodles, rice and hand soap are still available.

Even so, economists warn the sudden halt to business will take a toll on the economy.

Bhima Yudistira, an economist at the Institute of Development of Economics and Finance, expects South-east Asia's biggest economy to post its sharpest slowdown since 2009, following the subprime financial crisis.

Indonesia’s GDP will slow to an annual growth rate of less than 4.5 percent this year compared with a government forecast of 5.3 percent, owing not only to the outbreak but also US China trade war and the oil stand off between Saudi Arabia and Russia, Mr Bhima said.

"From the Indonesian perspective, this year will be far more dangerous than 2008," he said.

Back at the Ambassador, Mr Viky Ibrahim, 28, is hoping it does not come to that. Business has been brisk at his workplace, the REDKOPI coffee kiosk, since it opened in December.

Last Friday, Viky said the hole-in-the-wall with trendy matte grey walls and faux wood panel flooring served more than hundred coffees. But so far on Monday, it's been fewer than a dozen.

Viky worries for his job if the slowdown continues. Lockdown takes a toll on Jakarta’s most vulnerable citizens 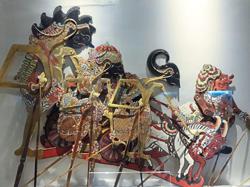 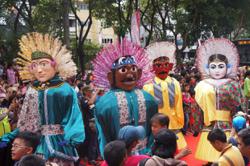