Travellers waiting to board their plane at the Changi Airport in Singapore. Singapore's Changi Airport, a major international transit hub, has announced a major drop in both passenger and aircraft movement, largely due to the coronavirus impact, it said in a statement on Saturday (March 14). - Bloomberg

SINGAPORE: Singapore's Changi Airport, a major international transit hub, has announced a major drop in both passenger and aircraft movement, largely due to the coronavirus impact, it said in a statement on Saturday (March 14).

The airport said passenger movements for February were down 32.8% year-on-year to 3.45 million, while aircraft movements dropped by 12.3% to 26,200 landings and take-offs.

"Air travel demand continued to be impacted by the coronavirus disease 2019 (Covid-19) situation," the airport said, adding air traffic with China, which last year provided a fifth of all visitors to the city-state, had dropped by a whopping 92%.

But the Monetary Authority of singapore sought to reassure the public on Friday that markets are "functioning normally” as the coronavirus crisis sparks huge sell-offs around the globe.

"The singapore Dollar money market and foreign exchange market are functioning normally in the face of heightened volatility in global and domestic financial markets,” the central bank said in a statement. The MAS "stands ready to ensure the orderly functioning of financial markets and the stability of the financial system in singapore.”

The comments came on a day of wild swings in Asian markets, prompting several central banks in the region to inject liquidity into the financial system to calm the panic.

The MAS, which uses the exchange rate as its main policy tool instead of interest rates, said Feb. 5 there was room within its exchange-rate band to accommodate some weakness in the local currency to counter the coronavirus outbreak. The bank’s next scheduled policy decision is in April.

The MAS has left more liquidity in the banking system via money market operations, and singapore dollar interest rates have eased in tandem with global interest rates, the central bank said. 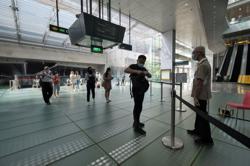