Muslim clerics told to pray for end of Covid-19

As Covid-19 swiftly spreads across the globe, infecting thousands of people from Singapore to Northern Ireland, Indonesian Health Minister Terawan Agus Putranto (pic), a devout Christian, attended a national Islamic conference to ask Muslim clerics to pray for the end of virus.

“I just landed here last night, (after) joining the Congress of the Indonesian Islamic Community.

(The visit) was important, for I wanted to ask for a prayer, ” the minister said as quoted by kompas.com in Jakarta on Thursday.

The congress, organised by the Indonesian Ulema Council (MUI), was held in Pangkalpinang, Bangka Belitung, from Wednesday to Saturday.

The health minister – a seasoned military doctor – has repeatedly said he believes the power of prayer is one reason Indonesia has been spared from the virus outbreak so far.

He said that from hundreds of samples tested by the government, none had come back positive, indicating that the nation was still free from the virus.

“We can only pray, while also working, testing and taking action to detect (any virus infection).

“If there is, we will respond to it. We are still checking and preventing (the spread); we are (taking measures) according to WHO standards, ” he said.

In his speech, Vice-President Ma’ruf Amin said many Muslim clerics had recited the qunut prayer, and that could have been the reason why Indonesia had remained coronavirus-free.

In Islamic tradition, a qunut nazilah prayer is recited when the Islamic community faces a calamity, including a deadly plague.

Ma’ruf also thanked Terawan, who has worked hard to anticipate the outbreak.

“He is the goalkeeper. Even though other countries have experienced the outbreak... (Indonesia hasn’t). The Health Minister said it is because of the prayers of the Muslim clerics, ” he said. — The Jakarta Post/ANN 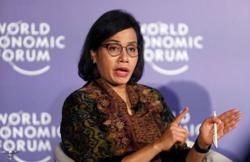