Workers at a textile factory. Vietnamese enterprises have already started looking to alternative sources of raw materials to deal with a shortage of raw materials due to the epidemic in China. VNA/VNS Photo Thanh Vũ

HCM CITY, Feb 17 (Vietnam News/ANN) — Vietnamese companies, many of whom are facing a shortage of feedstock and raw materials as a result of the new coronavirus (COVID-19) outbreak in China, have started looking at alternative sources.

The epidemic has had a significant impact on public health, transportation, tourism, education, and, importantly, trade and commerce, experts said.

It has affected Việt Nam’s trade not only with China but also other markets, and started hurting Vietnamese businesses.

According to the Department of Import and Export under the Ministry of Industry and Trade, the impacts include prolonging delivery times and customs clearance due to the quarantine requirements on both sides.

In addition, trade by road, rail and air with China has slumped.

With Chinese goods not available, Việt Nam has been unable to source imports, which has affected its production and exports to third markets.

Many textile and footwear enterprises are therefore looking at raw material imports from other markets such as South Korea, India, Bangladesh, and Brazil.

Phạm Xuân Hồng, president of HCM City’s Textile Association, said this would only be a temporary solution since China could not be replaced as the main supplier by anyone else due to its much lower costs.

The epidemic has caused Chinese businesses to shut down production, especially in Wuhan, where there are a number of large factories, he said.

Since many textile plants in China are likely to be closed until the end of February or even longer, supply to Việt Nam would be hard hit, he said.

If the epidemic continues for the next one or two months, the global economy, including Việt Nam, would be in trouble, he warned.

But this is also an opportunity for Vietnamese businesses to look for other sources to relinquish their dependence on China, he pointed out.

Other countries like Thailand, India and Indonesia are also looking for other markets to source raw materials from to reduce their dependence on China, he said.

Companies, especially small and medium-sized enterprises, need Government support in the form of preferential loans and access to new technologies to sustain their business, he added. 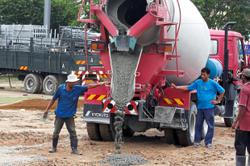