The outbreak has slammed the brakes on travel and tourism, just as data released on Monday shows an Abe-backed tax hike battered the economy in the last quarter of 2019, which contracted by the most in more than five years.

The fresh recession concerns are casting doubt on the stability that helped Abe become the country’s longest-serving premier in November.

Approval for Abe’s cabinet fell 5 percentage points from the previous month to 47% in a survey carried out by the Yomiuri newspaper Feb. 14-16. The survey found 52% of respondents were dissatisfied with the government’s handling of the virus outbreak.

A separate survey by broadcaster ANN found support had fallen 5.6 percentage points to 39.8% and 50% were unhappy with government policy on the disease.

Despite the hit in the ratings, Abe’s ruling Liberal Democratic Party is not facing any serious challenge to its leadership. A Kyodo News poll showed the LDP was still the most-favoured party with support at 40.5%, while the biggest opposition group, the Constitutional Democratic Party, was at 10.9%.

Unlike other places that have issued blanket bans on visitors from China due to the virus, Abe’s government has adopted a softer approach with Japan’s biggest trading partner by limiting the restrictions to foreigners who have been in virus epicentres, such as Wuhan.

Critics, including the opposition Democratic Party for the People, have called for a bar on all visitors from China, where there have been more than 70,000 cases.

Japan has found more than 400 cases of the virus, 355 of them among the passengers and crew from a cruise ship held in quarantine in the port of Yokohama.

A series of scandals also continue to take a toll on support for Abe. The survey conducted by Kyodo found 84.5% of respondents said he had failed to clear up a series of allegations including dispensing invitations to a publicly funded cherry blossom-viewing party as favours to his supporters.

Some 77.5% of respondents to the Kyodo poll said Japan should rethink its plans to develop casino resorts following the indictment of a lawmaker on bribery charges related to the proposals. Tsukasa Akimoto, an LDP member, has denied taking bribes from a Chinese company.

Abe has said he will step down at the end of his third straight term as party leader next year. He need not hold a general election until 2021. - Bloomberg 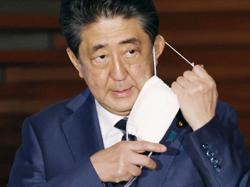 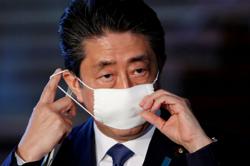