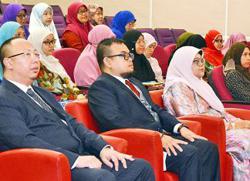 BRUNEI, Feb 10, Borneo Bulletin/ANN -- Brunei Darussalam’s Instagram users are the third highest in the world, reaching audiences totaling 210,000 or 60 per cent (by eligible audiences above 13 years) in terms of population ratio.

The growth rate of Instagram usage is about 2.4 per cent. The Sultanate levelled with Iceland and Kazakhstan that also recorded a rate of 60 per cent.

These are takeaways from the Digital 2020 Report by global agency

For Facebook, users in the Sultanate were the 10th highest globally, with 89 per cent or 310,000 users (13 years and above) in terms of population ratio. Aruba, Qatar and the United Arab Emirates (UAE) came in top three with 96 per cent, 96 per cent and 95 per cent.

The report also stated that Brunei Darussalam is the second highest in terms of social media use by eligible audiences (13 years and above) with use rate of 117 per cent or 410,000 users. Kuwait came in top with 122 per cent or 4,200,000 users.

Meanwhile, women in the Sultanate constituted the sixth highest users of Twitter, amounting to 60 per cent or 48,400 based on population ratio, after the Philippines (86 per cent), Thailand (78 per cent), Indonesia (68 per cent), Malaysia (67 per cent) and Laos (64 per cent). This latest edition of Global Digital Reports revealed that more than 4.5 billion people across the globe now use the Internet, while social media users have passed the 3.8 billion mark. Nearly 60 per cent of the world’s population is already online.

The latest trends suggest that more than half of the world’s total population will use social media by the middle of this year. Some important challenges remain, however, and there’s still work to do to ensure that everyone around the world has fair and equal access to life-changing digital connectivity.

In particular, roughly 40 per cent of the world’s population remains ‘unconnected’ to the Internet, with the latest data indicating that women are more likely to be ‘unconnected’ compared to men.

The gender gap is particularly apparent in Southern Asia, where men are three times more likely to use social media compared to women, providing a meaningful reference for the gender gap in the region’s broader Internet use.

However, almost 300 million people came online for the first time over the past 12 months, with the majority of those new users living in developing economies. The Internet is also playing an ever more important role in our lives.

With the world’s Internet users spending an average of six hours and 43 minutes online each day, the typical user now spends more than 40 per cent of their waking life using the Internet, and humanity will spend a combined total of 1.25 billion years using the Internet during 2020.

Mobile devices will account for more than half of all the time we spend online this year, but most Internet users still use a combination of mobiles and computers to access the Internet. When it comes to mobile activities, apps now account for more than 90 per cent of our total time spent.

The data also revealed that people are using apps in an increasingly varied range of everyday activities, but social media still accounts for half of all the time we spend using mobile devices.

On average, the world’s Internet users spend two hours and 24 minutes using social media across all devices each day, accounting for more than one-third of our total Internet time.

We Are Social has also added a variety of new data points to this year’s reports compared to previous editions, including a closer look at some of the world’s most popular social media platforms, and the growth of important categories like Smart Home, Ride Hailing, and Digital Advertising.