SINGAPORE: Netflix released lists of its most popular content in Japan, Korea, India and Malaysia on Monday (Dec 30), showing that a mix of American shows and local-language content best captured hearts and eyeballs in Asia this year, with Michael Bay's "6 Underground" the only title proving a top hit in all territories.

Netflix said the most-watched lists had been compiled by tallying the number of accounts that had streamed at least two minutes of the content in question during its first 28 days on the platform in 2019.

In Japan, five out of the top 10 works of the year were Netflix originals. Three were animated, while a fourth is a live-action adaptation of an anime.

In second place was "Big Brother"-like reality show "Terrace House: Tokyo 2019-2020." The fifth outing for the franchise, it follows three men and three women as they temporarily live together in a house in Tokyo. "6 Underground" -- the $150 million-budgeted, Bay-directed action film starring Ryan Reynolds -- came in third, making it the most popular American content in the territory this year.

Fourth was last year's "Gintama 2: Rules Are Made to Be Broken," a live-action adaptation of a popular manga. "Rilakkuma and Kaoru," a stop-motion animation series based on a beloved bear character first popularized via stationery and merchandise (think Hello Kitty), took fifth place.

Netflix's new anime version of the popular "Ultraman" manga came in sixth, while the Daisuke Miura-directed film "Call Boy" came in seventh. It tells the story of a bored college student who becomes a male host and finds meaning in fulfilling women's desires.

The streaming debut of the classic 26-episode anime series "Neon Genesis Evangelion," which first aired in the mid-1990s, made a splash this year as the eighth most-viewed title in Japan. Meanwhile, the new Henry Cavill-starring fantasy series "The Witcher" came in ninth, despite only hitting the web days ago on Dec. 20. The James Wan-directed DC Comics film "Aquaman" was 10th.

In South Korea, local-language content, particularly romances and works with female leads, and US series reigned. The most-viewed content of 2019 was the six-episode period horror series "Kingdom," Netflix's first original Korean series. Adapted from a webcomic and directed by Kim Seong-hun, it has been renewed for a second season that will land in March.

"6 Underground" and "The Witcher" took the second and third top slots. Korean romantic comedy "Crash Landing on You" came in fourth, despite having only aired from mid-December. The 16-episode series tells the story of a rich South Korean heiress who falls in love with a North Korean officer after she paraglides into him while he is on duty in the demilitarized zone that separates the two countries.

Popular sassy stand-up comedian Park Na-rae's hour-long special, "Park Na-Rae: Glamour Warning," came in fifth, while the Netflix original series "Persona" came in sixth. It stars the same actress -- singer Lee Ji-eun, better known by her K-pop stage name IU -- in four different stories directed by four different directors. Season 2 is supposed to stream next year, but production was at one point suspended after the young K-pop star Sulli, cast as the lead and in the midst of filming, was found dead at her home in October.

For India, local Hindi series and films accounted for all but one of the most-viewed releases of 2019, with "6 Underground" the sole exception, ranking eighth.

The top title across both film and television was Season 2 of "Sacred Games," a thriller series based on Vikram Chandra's bestselling novel, whose first season marked Netflix's first original series for India. The second most-viewed title was "Kabir Singh," a romantic drama written and directed by Sandeep Vanga, which became the second highest-grossing Bollywood film of the year during its summer theatrical run.

"Delhi Crime," the seven-episode true crime series written and directed by Richie Mehta, came in eighth. The show tells the story of the aftermath of a brutal 2012 Delhi gang rape case and has been renewed for a second season. Netflix original Indian film "Chopsticks" came in 10th. 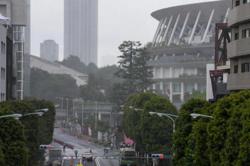