Jinan: A viral video of a baby boy found buried alive has prompted a police investigation.The baby was saved hours after being buried alive on Aug 21 in Nanbaita village of Jinan, Shandong province, by two villagers who were digging for mushrooms.

One of them made a video and sent it to local media with the hope of finding his relatives.

On Sunday, a man in his 50s surnamed Liu, who claimed to be the baby’s grandfather, turned himself in at the Yangliu police station.

The baby is the younger child of a set of twins. He was diagnosed with several diseases at birth and needed a respirator, Liu said.

The baby’s grandmother buried him after it appeared that he had died at home, he added.

Liu learned that the boy was still alive after watching a news broadcast on Saturday and allegedly said he was willing to take him back.

The baby showed symptoms such as inflammation in his lungs and spinal deformity, said a doctor at the Tai’an Hospital of Children.

The doctor said such symptoms were common in premature babies and he could be cured with proper treatment. — China Daily/ANN 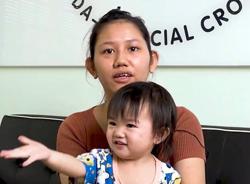