An unidentified man launched a knife attack on three people, critically injuring one, near a Hong Kong “Lennon Wall” in the early hours of Tuesday morning.

The suspect stabbed his victims – two women aged 26 and 35 and a man aged 24 – after hearing their views on the anti-government protests that have rocked the city, witnesses said.

One woman was left in critical condition with a head wound following the assault in Tseung Kwan O, while the other woman suffered wounds to her hands.

The third victim, a 24-year-old man required seven stitches in a head wound and suffered cuts to his left arm.

The trio were treated at Queen Elizabeth Hospital in Yau Ma Tei, and at Tseung Kwan O Hospital, a spokeswoman for the Hospital Authority said.

According to police the attack took place in a tunnel between Hau Tak Estate and Chung Ming Court in Tseung Kwan O at 1.35am. 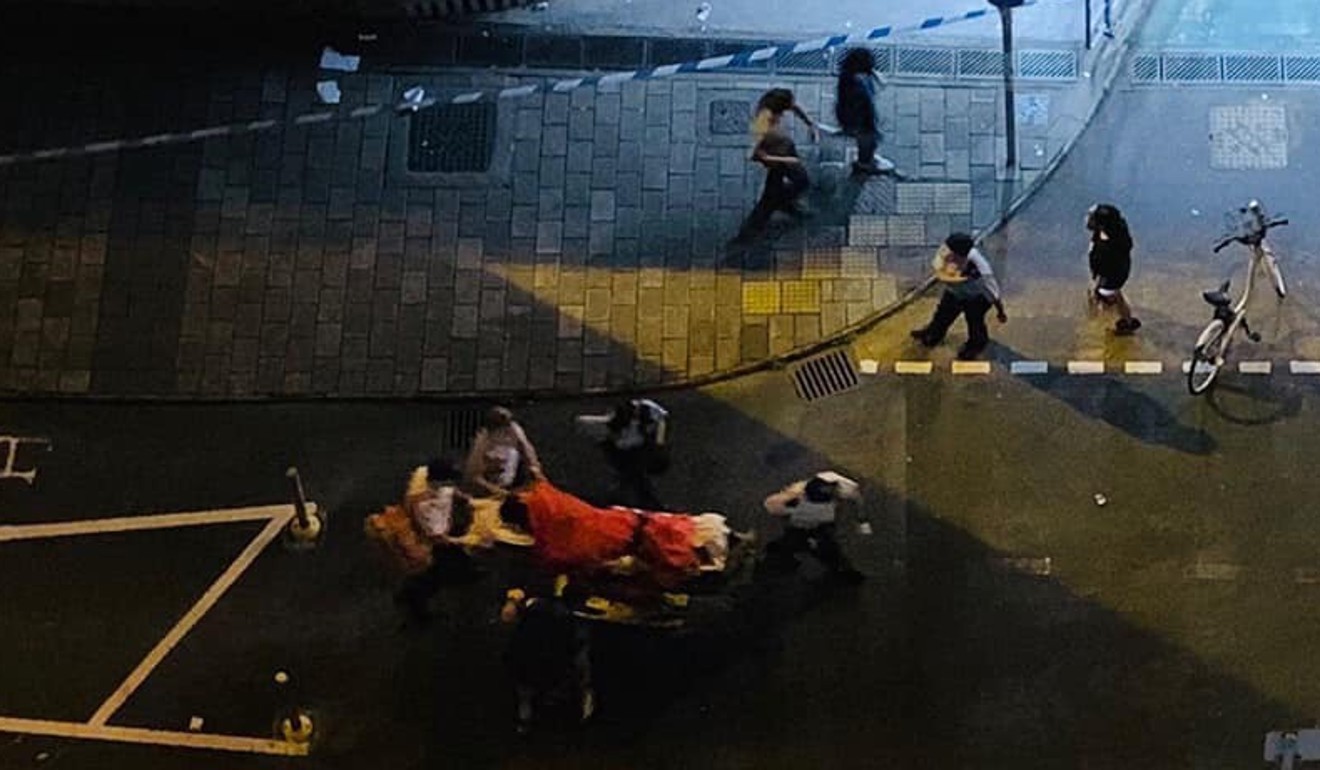 In a video reportedly filmed during the attack, about four to five people were seen fleeing from the tunnel – which had recently been turned into a Lennon Wall, a place where colourful notes supporting the protests are posted – amid loud screaming.

In the video, one woman was heard yelling: “Stabbing! He is carrying a knife.” A man screamed: “Call the police!”, while another man shouted: “Go away, you guys!”

A woman with blood on her arms was seen picking up her backpack hastily from the ground and running towards the tunnel’s exit.

Local residents have been turning public spaces in various parts of Hong Kong, including footbridges, tunnels and external walls of buildings, into Lennon Walls for months with messages on Post-it notes related to the extradition bill protests.

Speaking before meeting her advisers from the Executive Council on Tuesday, Chief Executive Carrie Lam Cheng Yuet-ngor said police would follow up on the incident.

“The SAR government will condemn any violent act ... It will be handled in accordance with the law,”she said. A witness, who claimed he was drinking with a few others near the wall at the time of the incident, said on a radio programme on Tuesday morning that a man in casual wear had approached them.

“He asked us what we thought about [the protests],” he said. “When we expressed our views, he said: ‘I can’t hold it any longer.’ Then he took out a knife from his pocket and stabbed my two friends.”

Another witness, surnamed Chan, told a local newspaper the two female victims were chatting when the assailant came up to them and joined the conversation. They talked about recent protests and political issues.

The women reportedly asked the man not to get too close because he was smoking a cigarette. Soon after, he took out a knife to attack them.

“The man was checking us out in the tunnel for about 20 minutes. It made me feel very uncomfortable. I just thought he must be someone with opposing views,” the witness said.

Pan-democratic lawmaker Roy Kwong Chun-yu, who arrived at the scene shortly after 4am, said security footage showed a man dressed in clothes similar to that of the suspect had entered Kar Ming House, a block in Chung Ming Court, early on Tuesday.

The man took the lift to the 21st floor, changed his clothes and then left the building. Kwong said residents later found a shirt, believed to belong to the suspect, in a rubbish bin in the building. 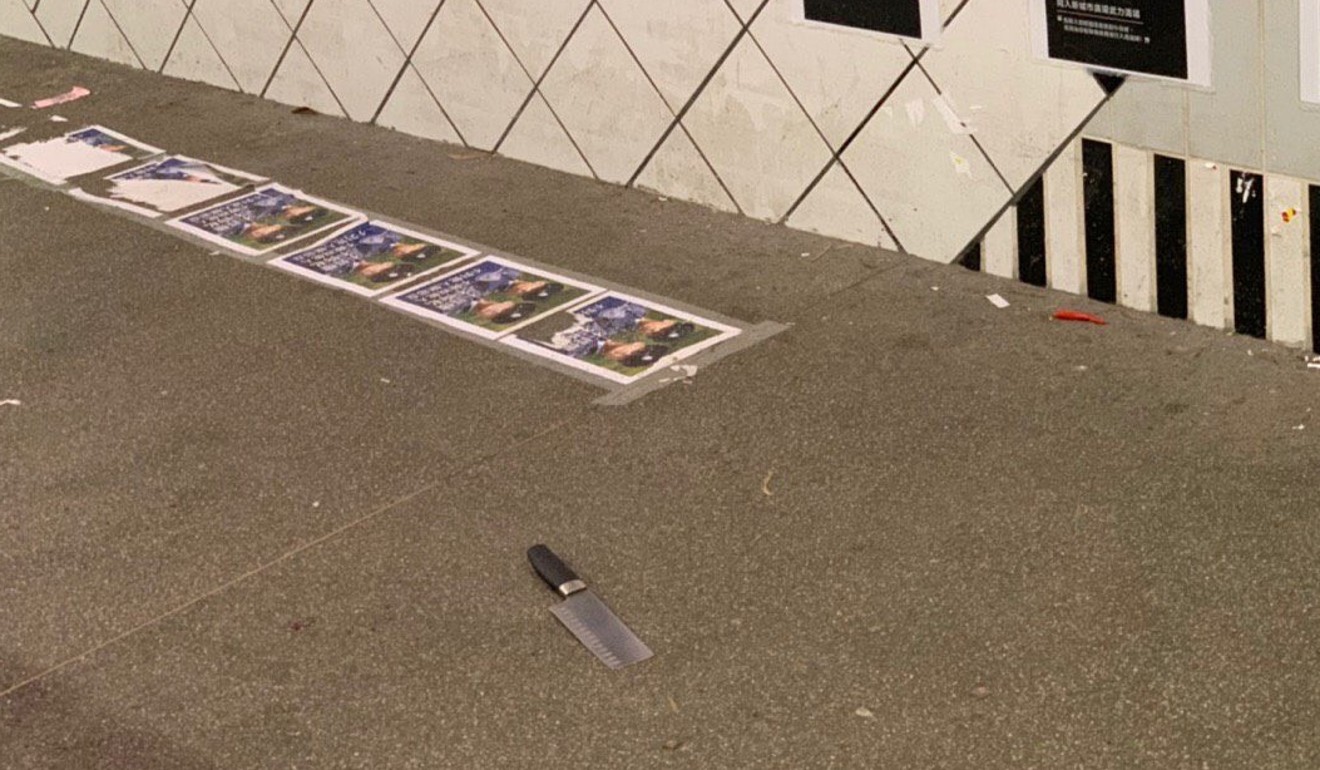 “Police came here to investigate for a second time after local residents formed a patrol squad and found what they believed was evidence,” Kwong said on a radio programme on Tuesday.

“The government needs to tell us whether we still live in a safe society.”

A police spokeswoman said officers would release more details on the attack later.

Hong Kong has been rocked by months of street protests and political unrest over the now-shelved extradition bill, which would have allowed the transfer of criminal suspects to jurisdictions with which the city lacked such an agreement, including mainland China.

On Sunday, men with sticks beat up Leung Kam-shing, convenor of the North District Parallel Imports Concern Group and a vocal critic of the extradition bill, in Sha Tin, and also threw an unknown white powder on his head.

Leung had organised a number of anti-parallel-trader protests in the past. The latest one, on July 13, was named “Reclaim Sheung Shui march”, which he said was attended by 30,000 people.