At least two of the three men arrested at the weekend over the city’s biggest bomb plot are members of different pro-independence groups, suggesting there could have been collaboration across the movement, it emerged on Sunday.

Both groups have denied knowledge of the explosives found at an industrial building in Tsuen Wan, with one of them labelling the arrest as political suppression, saying their organisation never had any plans to use bombs.

A 27-year-old man, surnamed Lo, was arrested on Friday night at Lung Shing Factory Building in Texaco Road, following a police raid that led to the discovery of 10 petrol bombs and about 2kg of the powerful explosive triacetone triperoxide – the largest seizure of its type by the force since the return of the city from Britain to China in 1997.

While Lo was a member of Hong Kong National Front, one of the two 25-year-olds arrested on Saturday night, surnamed Tang, belonged to Hong Kong Independence Union.

Wayne Chan Ka-kui, convenor of the union, confirmed on Sunday that Tang was one of its members and was still being held by police to assist in investigations.

“We never had any plans to resort to explosives. I would say it is a political suppression,” Chan said.

The group also issued a post on social media, saying: “We would not be scared by even more arrests.”

A police spokesman said the three, who were still detained as of Sunday evening, were arrested for possession of explosives without licence. 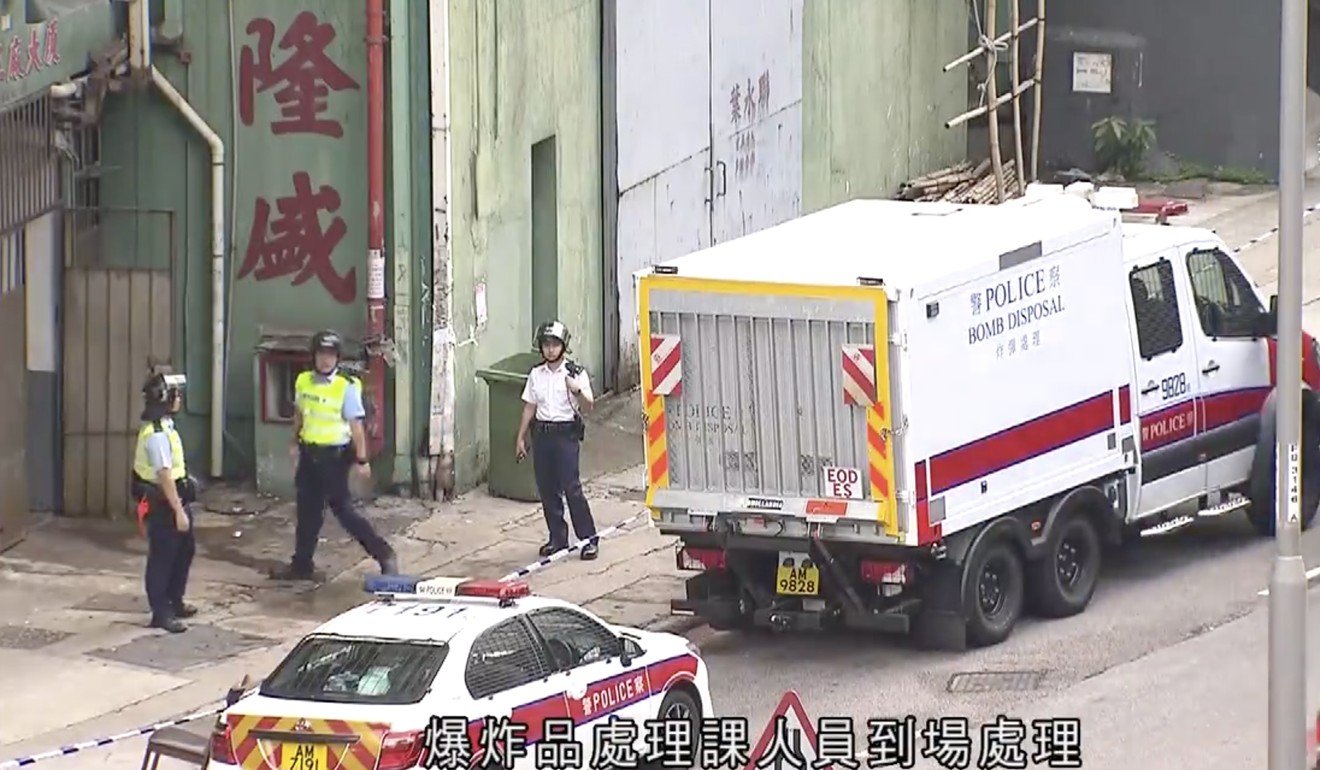 The pair arrested on Saturday night were understood to be closely associated with Lo, who reportedly rented the unit.

He confirmed that Lo had contacted them for assistance and they would speak further after their member was out on bail.

Leung said he reported earlier this year to police that their storage room in Sha Tsui Road, Tsuen Wan, was broken into and some flags were stolen ahead of the annual New Year’s Day march.

Among the seizures on Friday were knives, catapults, helmets, face masks and goggles. Other items uncovered were Hong Kong National Front T-shirts, leaflets bearing the message “no extradition to China” and pamphlets promoting the June 9 extradition march.

A police source said detectives were still investigating the source of the explosives and what they were intended for.

Senior Superintendent Steve Li Kwai-wah, of the Organised Crime and Triad Bureau, said on Saturday that the industrial unit had been rented out for a few months and they would investigate whether the seizure was related to the recent extradition bill march.

The front has proposed “building Hong Kong nationality, retaking our rights of self-determination”.

In 2016, a few party members waving banners carrying the words “Hong Kong is not China” dashed to the stage of the June 4 candlelight vigil at Victoria Park, chanting “Hong Kong Independence”.

The group had also worked with another pro-independence group Student Localism to distribute pamphlets outside schools to promote independence.

It was one of the several groups advocating independence in Hong Kong, with many turning low profile after the most prominent group, Hong Kong National Party, was banned in 2018.

Leung, founder of localist group Youngspiration, joined the Hong Kong National Front as its spokesman after the unprecedented ban in September 2018, saying he wanted to do more as he predicted that independence groups could only “go underground”.