At least 36 people were injured in unprecedented late-night violence at a Hong Kong railway station on Sunday, as a rampaging mob of men in white T-shirts attacked black-clad protesters and passengers indiscriminately.

No police officer was in sight as dozens of men, who witnesses suggested were triad gangsters, stormed into Yuen Long MTR station at around midnight by forcing open closed entrances. They hurled objects at protesters and travellers alike, and assaulted members of the public, including journalists.

Some people protected themselves with umbrellas, while others tried to fight back by hurling helmets at them. By the time riot police arrived, local residents were furious and accused them of deliberately letting the assailants run wild.

By 2.30am, at least 36 people had been sent to one of three nearby hospitals or had sought treatment there themselves, according to the Hospital Authority.

Trains had been bypassing the station since 11pm because of a previous rampage by the same or similar mob of men in white T-shirts attacking protesters returning from another anti-government mass march opposing the now-suspended extradition bill in the heart of the city’s financial district.

While protesters in Wan Chai, Central and Sheung Wan were facing off with riot police, at around 10.30pm, the attackers ran onto trains, using rods to attack passengers and chase after anyone wearing black, witnesses said.

A live video clip shows passengers on board a train screaming in fear as a group of armed men in white wave their rods at them at Yuen Long MTR station. pic.twitter.com/0htLQeKErF

The government condemned the attacks in statement released after midnight.

The statement said: “In Yuen Long, some people congregated at the platforms of the MTR station and train compartments, attacking commuters. It led to confrontations and injuries.”

As it happened: how a march ended with tear gas fired and violence

It continued: “This is absolutely unacceptable to Hong Kong as a society that observes the rule of law. The [government] strongly condemns any violence and will seriously take enforcement actions.” Stunning video clips circulating online and played on television screens captured the chaos and terror as passengers scrambled for cover.

Among the injured was opposition lawmaker Lam Cheuk-ting, who was bleeding from his face, and a female reporter with injuries on her arm.

Police officers, who arrived at the station at 11.15pm, when the mob was gone, were surrounded by dozens of angry residents and protesters. 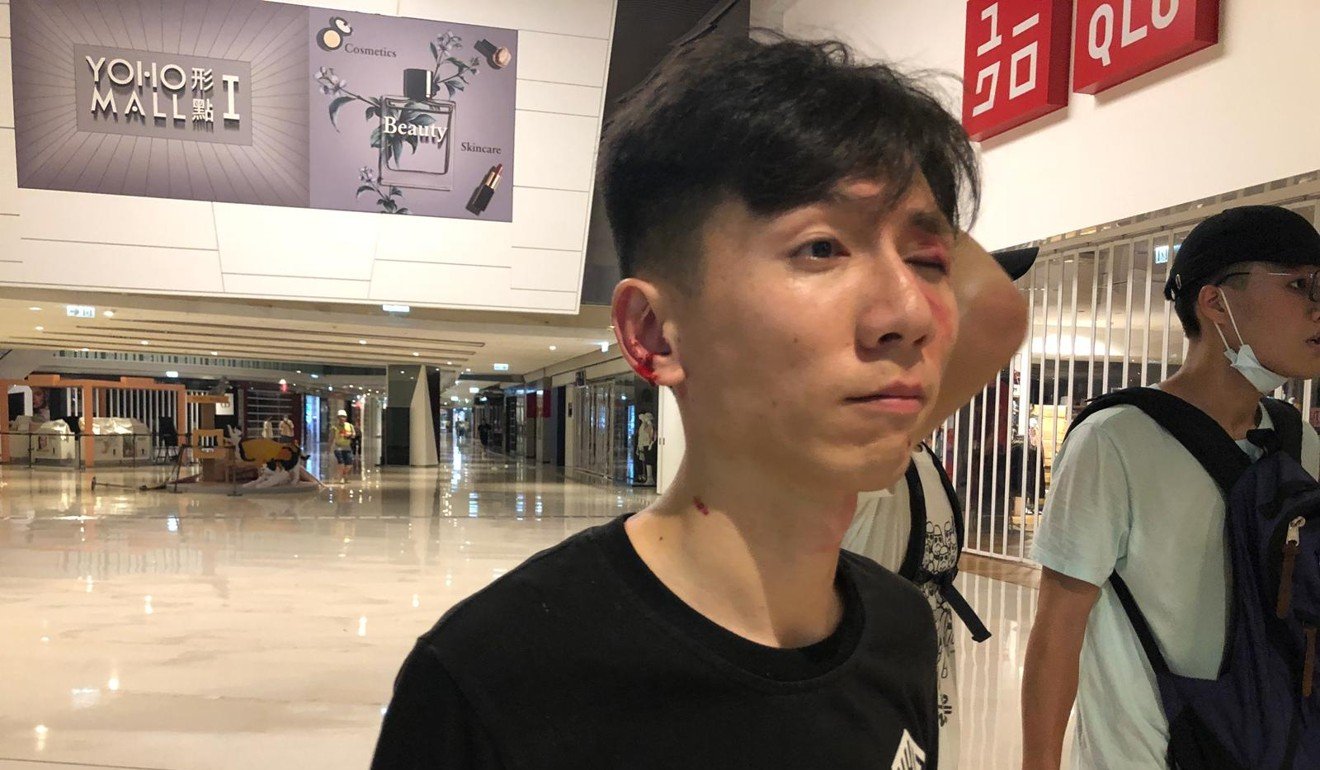 “Where have you been? You are supposed to protect us!” they shouted, expressing their anger with expletives.

One man, who was attacked at the station during the midnight invasion, accused police of deliberately retreating after being called to the scene for the first assault.

At about 1am, as many as 100 riot police arrived at Nam Pin Wai village, where most of the men dressed in white shirts had gathered.

But after blocking entrances to the village for more than three hours, the police had only briefly questioned several of the white-clad men. No one was arrested, but several steel bars were confiscated. Officers have refused to respond to queries.

In an early morning press conference, police officials said they saw no steel rods in the village and noticed nothing criminal.

“We have not made any arrests because we can’t be sure of those involved,” said Yau Nai-keung, assistant commander of Yuen Long District. “Even those dressed in white, that doesn’t mean they are involved in the brawl. We will handle each case fairly – no matter the political camp [a suspect] belongs to.”

Three press watchdog groups strongly condemned the assault of two journalists at Yuen Long station. Both were reportedly beaten with weapons, including by wooden rods, leaving one female reporter hospitalised.

“We urgently appeal to the police to perform their duty and protect the people and journalists,” said a joint statement by the Hong Kong Journalists Association, the Press Photographers Association and Independent Commentators Association. 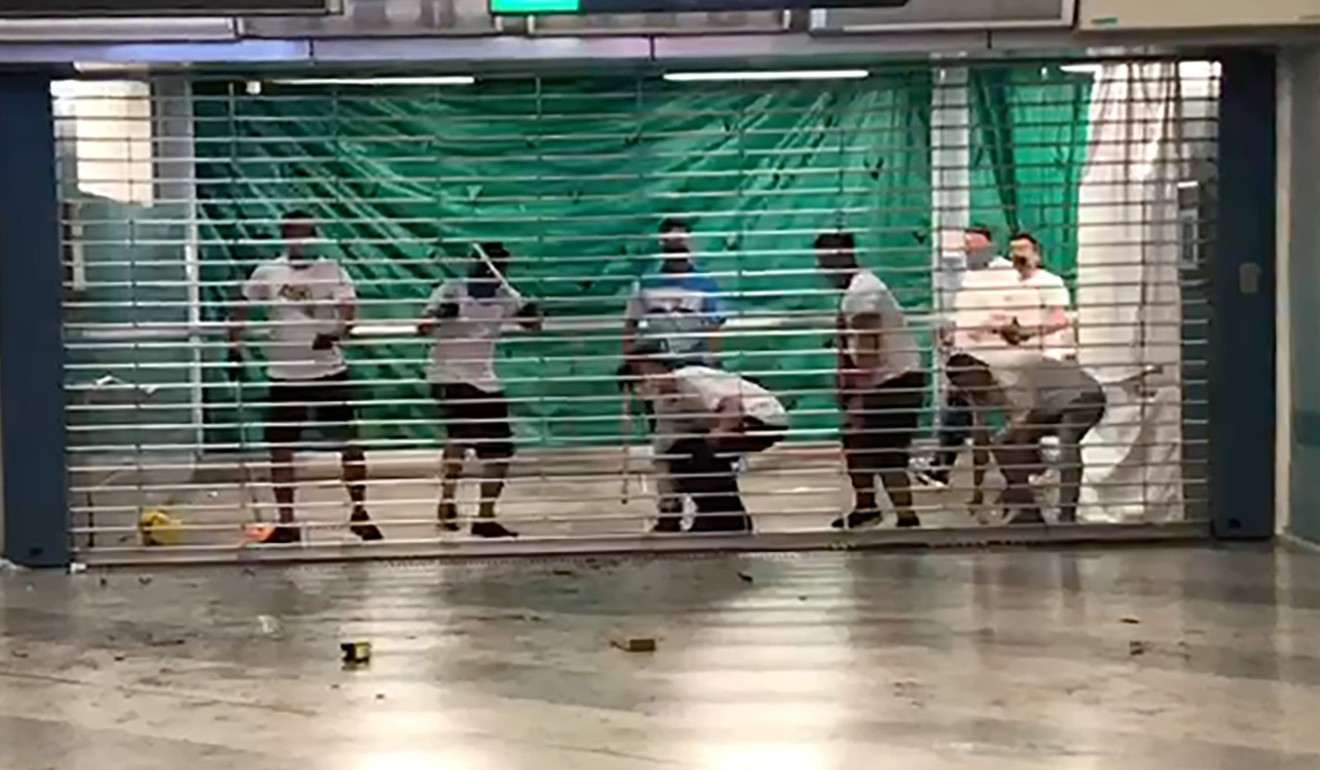 An MTR spokesman said workers at Yuen Long station noticed disputes taking place at about 10.45pm. Staff members immediately reported the situation to the operations control centre, which contacted the police within two minutes. Fighting then broke out on the station concourse and the fire alarm was triggered.

At 10.56pm the control centre arranged for West Rail Line trains of both directions not to stop at Yuen Long and also tried to arrange trains to pick up passengers there. 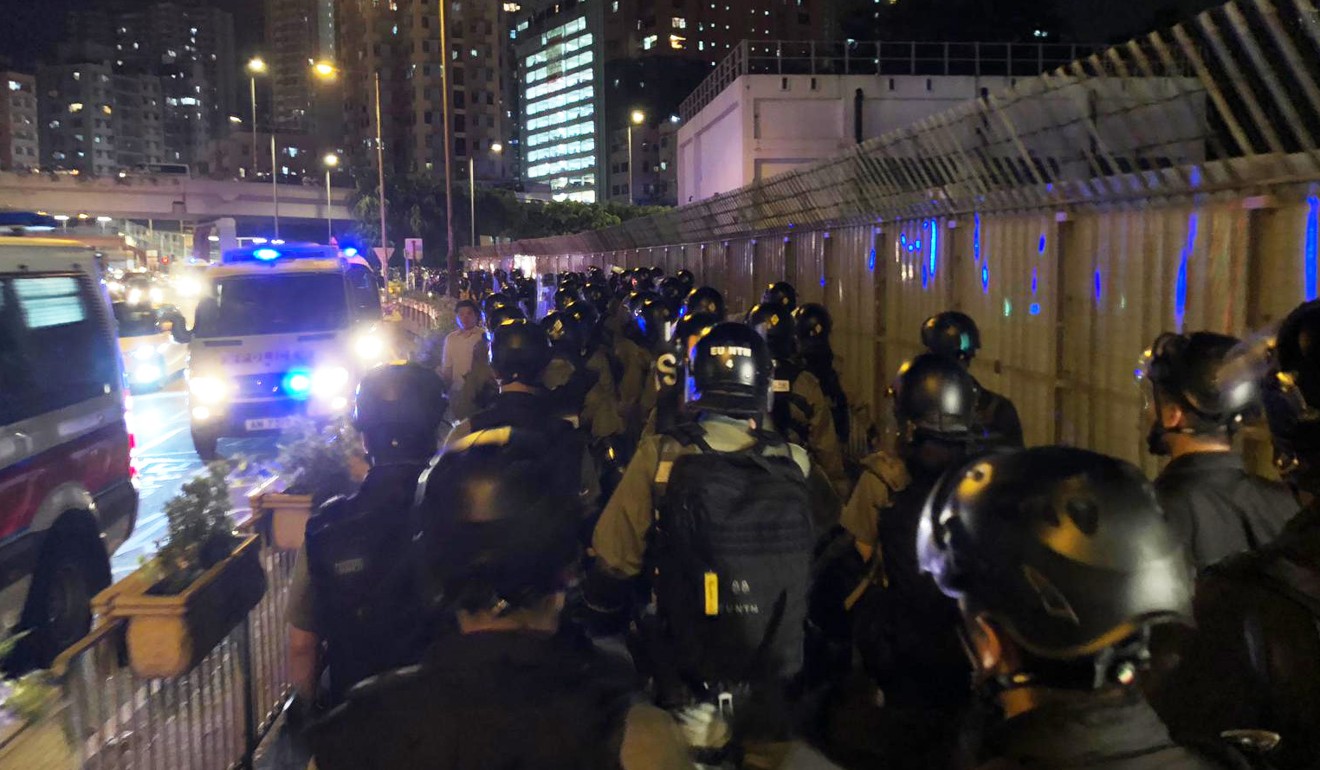 The control centre made arrangements for the trains to resume stops at Yuen Long from 11.19pm.

In a video circulated online, pro-establishment lawmaker Junius Ho Kwan-yiu was seen shaking hands with men in white T-shirts lining up on Fung Yau Street East. He was unavailable for comment by publishing time.

But in a video he posted on his Facebook page early Monday morning, Ho, who lives in Yuen Long, said he came across the group of men in white shirts on the street and took a picture with them. He said he knew some of them and he regarded all of them as “chivalrous men” who safeguarded their homes.