Blissfully unaware: Ah Hla’s six-month-old son sleeping in her lap as she describes her husband’s sudden arrest and death in Mrauk U. — Reuters

MRAUK-U: When 35-year-old Ah Hla showed up to a police station in western Myanmar in late April hoping to see her husband among the prisoners, she didn’t know whether he was alive or dead.

Several dozen men, including her fisherman husband, had been detained weeks earlier when the military raided their village in central Rakhine state’s Mrauk-U township and accused them of belonging to a rebel army, residents said.

But when she arrived, police told her that Thein Tun Sein, her husband of 15 years, had hanged himself in his cell and his body had already been disposed of.

“I passed out on the floor of the police station,” she said tearfully, cradling her six-month-old son.

An army spokesman said three detainees had died in custody – besides Tun Sein, a 24-year-old man had a heart attack while another died from drug withdrawal. 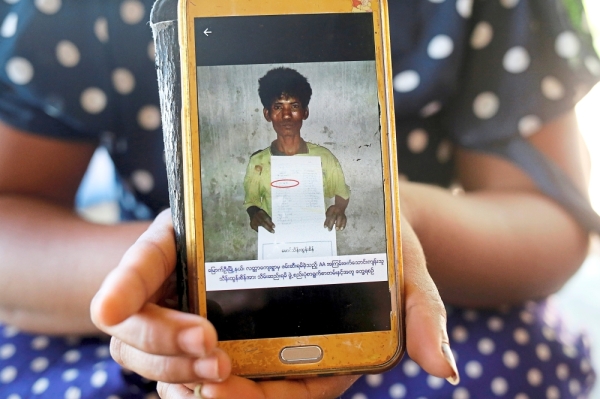 Grim fate: Tun Sein on the day of his arrest in a photo provided to his family by the police. — Reuters

In Rakhine state, where security forces expelled over 700,000 ethnic Rohingya Muslims in a 2017 campaign the United Nations says was done with “genocidal intent”, Myan­mar’s military is waging a new war.This time, the target is the Arakan Army, an armed group that recruits from the state’s mostly Buddhist ethnic Rakhines and seeks greater autonomy for the region that was an independent kingdom for centuries.The Arakan Army draws on deep-seated historical resentment felt by some Rakhines towards the ethnic Bamar majority that dominates the central government, and their sense that Myanmar’s faltering transition to democracy has not brought the western state greater prosperity or self-determination.

The authorities imposed a regionwide Internet shutdown in late June, citing the need to avert unrest.

Yanghee Lee, the UN expert on human rights in Myanmar, said last week that both sides may be committing “war crimes” under the cover of the blackout, citing reports of deaths during army interrogations.During a rare trip by Reuters to the conflict zone, much of which is off-limits to journalists and humanitarian agencies, 10 residents gave accounts of soldiers firing weapons indiscriminately, killing and wounding civilians, and torturing detainees.According to three lawmakers in the region and Amnesty Interna­tional, the military has deployed as many as five Light Infantry Divi­sions – shock troops famed for brutal counter-insurgency campaigns against the nation’s myriad ethnic armed groups.

Outside a courtroom in Sittwe last week, the detained men taken in the same raid said they were innocent and urged journalists to “tell the truth” about what had happened to them.

“They tortured us in many ways,” one of the men shouted. “We were beaten in so many ways.” — Reuters