By Sandy Li and Pearl Liu

Hong Kong’s infatuation with micro-apartments, some of which hold the world record as the smallest living space constructed for humans, has ended almost as quickly as it began.

Known variously as nano flats, micro-apartments and shoebox homes, these abodes are specifically designed to be small, typically less than 200 square feet (18.6 square metres) in size.

Two of every three of these homes built in Hong Kong since 2016 were constructed this year. Of these 976 units that were added, 461 units remain unsold as of this week, according to calculations by the South China Morning Post using data by Dataelements, which monitors the sale of new flats in the city. 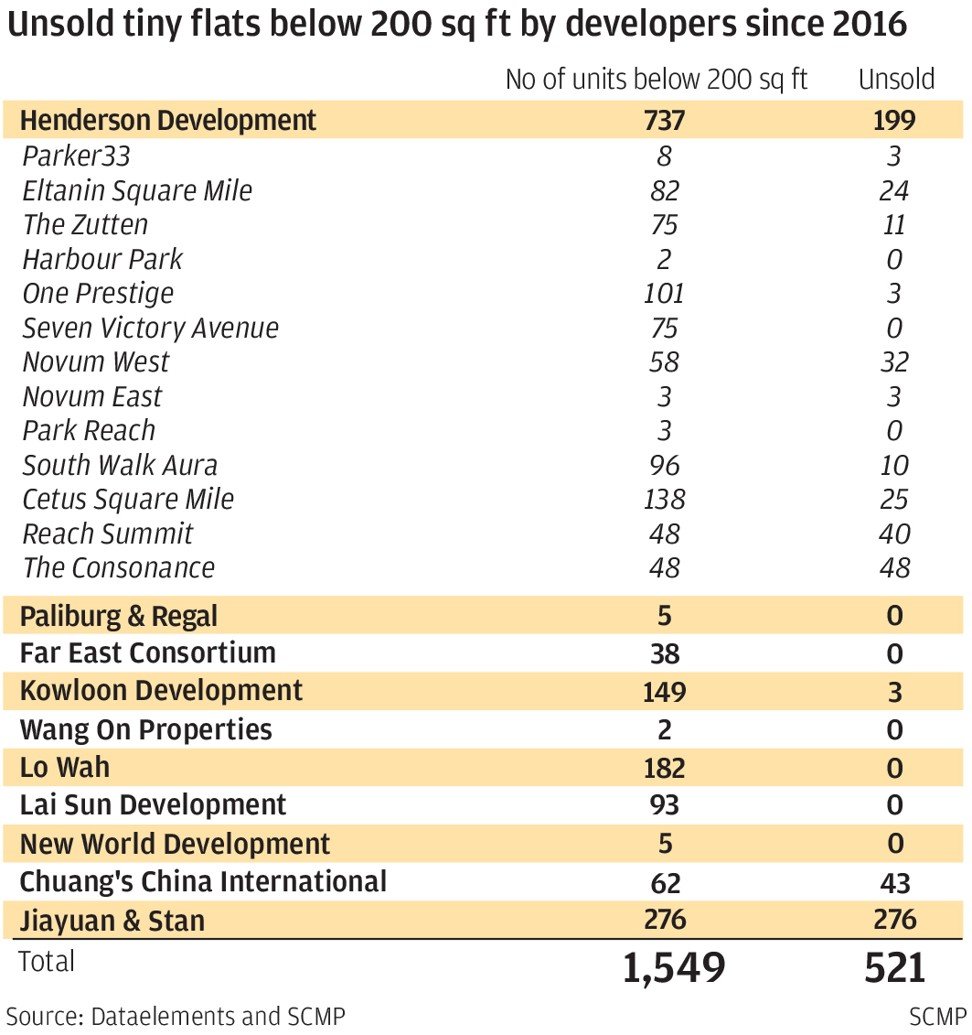 The unsold homes, backed by some of Hong Kong’s biggest developers, are what remains of a bull market that until August was the world’s most expensive urban centre to live in.

The infatuation began in late 2014. A supply shortage, combined with mortgage rates that hadn’t budged for a decade, had caused home prices to spiral.

Until nine months ago, it was not uncommon for a dozen buyers to submit bids for every new home on sale. That gave developers the reason to raise prices, sometimes by up to 14 per cent within weeks between different phases of a launch. 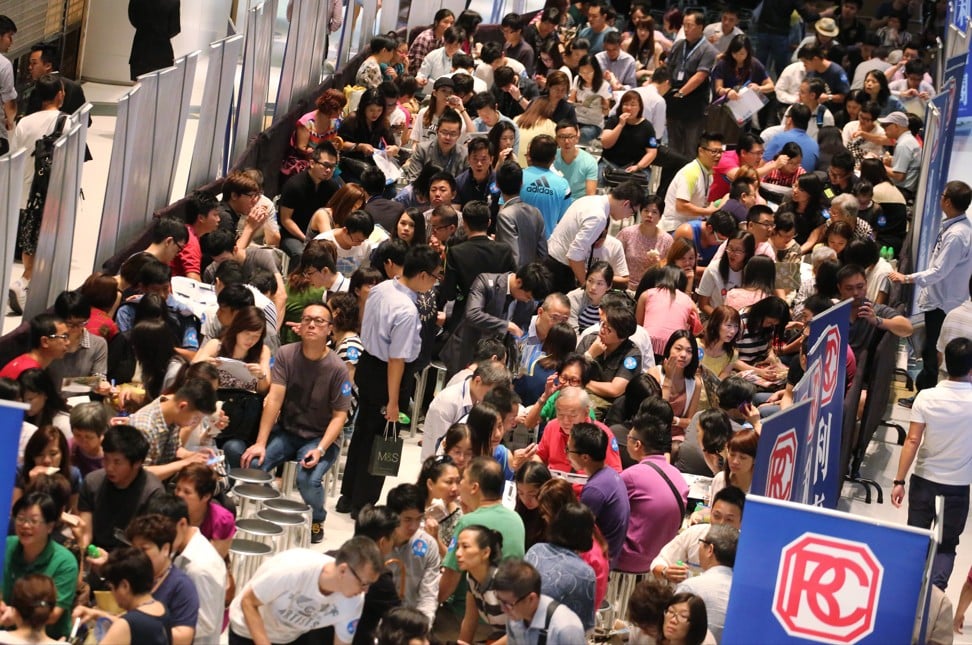 As spiralling prices put more homes beyond the reach of first-time buyers, the smallest units – and the only ones within budget – became popular.

Sensing a trend and seizing the opportunity, savvy developers piled in and subdivided what’s already small into the minuscule, setting one record after another for diminution.

CK Asset Holdings, the flagship company of retired tycoon Li Ka-shing, set the trend in motion in 2014 when its Mont Vert project in Fanling sold out in a massive success. The smallest unit, at 165 sq ft, was available for HK$1.29 million after a 15 per cent discount.

A record 976 of these were offered for sale this year in Hong Kong, more than double the 452 last year, and an 18-fold increase from 2013, according to data by Dataelements.

The high-water mark for this segment of the market was set in May, when a 190-sq ft flat at New World Development’s 30-storey Artisan House in Sai Ying Pun sold for HK$6.52 million, or a record HK$34,315 per sq ft.

Faced with a surplus of available homes, developers began offering discounts across all property types, by up to double-digit percentages, to attract buyers, causing prices to spiral downwards.

That changed the consideration for buyers, as larger flats that previously seemed out of reach are now affordable. In such a market, the smallest abodes became the first casualties.

“Whatever comes on during a bull market sells like hot cake, whether it’s a nano flat, or a larger unit, but when the market corrects, those buyers with the budget will prefer to trade up,” said Asia Allied Infrastructure Holdings’ chairman Dominic Pang Yat-ting. “Quality homes with decent sizes of around 600 square feet to 700 square feet” are now the preferred options, he said. 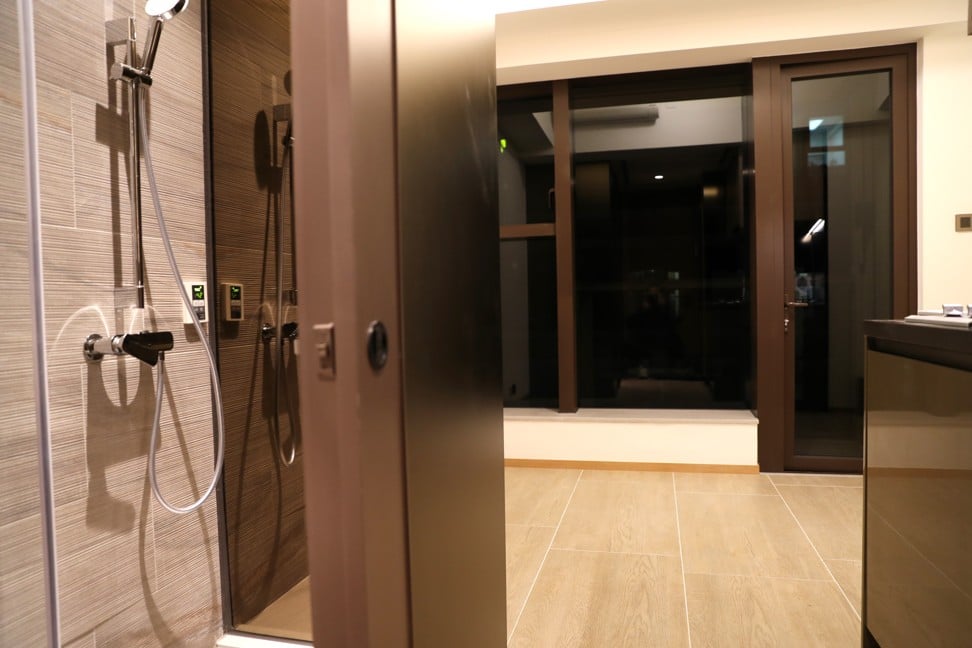 Pang should know. Known as Chun Wo Development until 2016, his company was the mastermind behind the T-Plus apartment complex in Tuen Mun.

He was persuaded by colleagues to change his plan only because they could not get their construction crew and their tools into the tight space for the interior fit outs, he said. 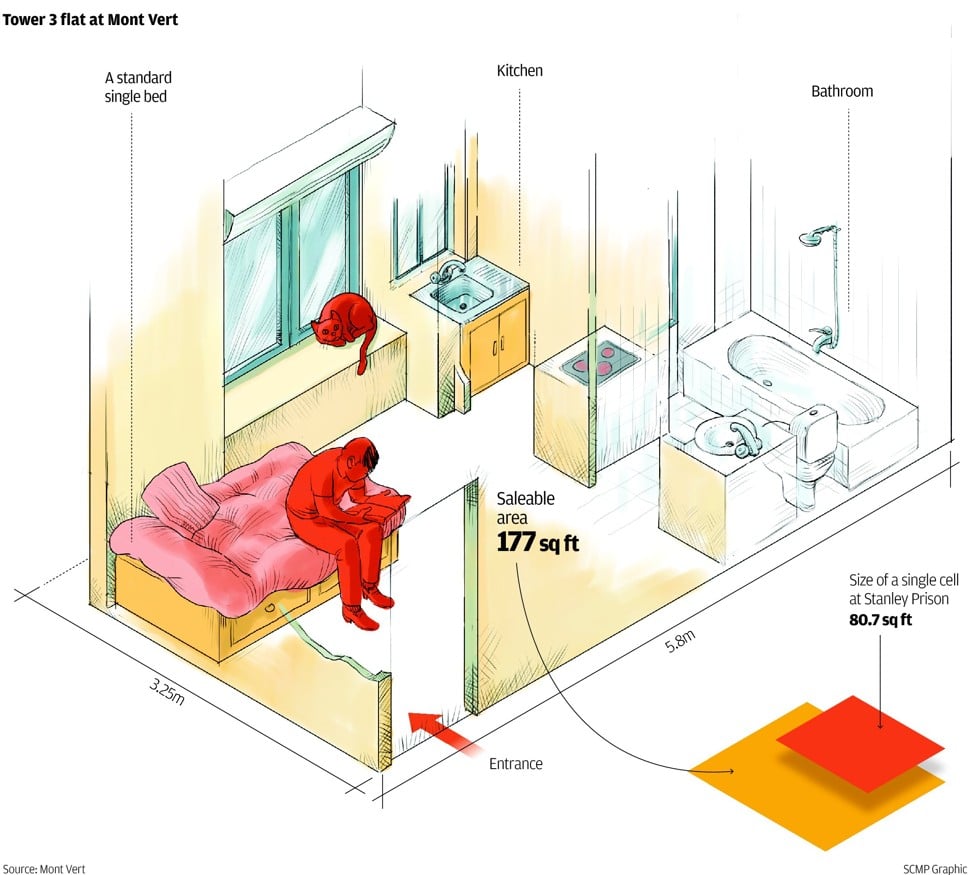 Work began in 2015, squeezing 356 units into the 19-storey tower, for a staggering 29 apartments on every floor.

Midway through construction in 2017, Pang sold T-Plus to 84-year old veteran investor Tang Sing-bor for HK$1.2 billion, or HK$7,900 per sq ft. Asia Allied would stay on as contractor to build the project, scheduled for completion in 2019. 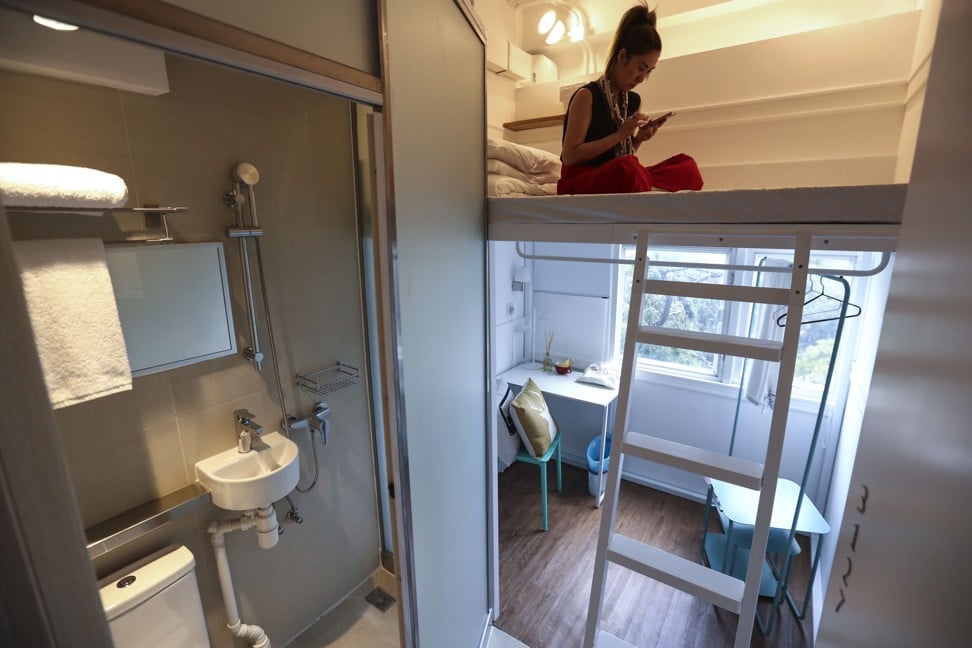 Criticised by civil advocacy groups as “inhumane,” T-Plus received its comeuppance two weeks ago, when just two apartments managed to find buyers in a sales launch of 27 units.

“We are unlikely to go that extreme in unit size again,” Pang said, after learning of the dismal sales performance.

It was the worst sales campaign Hong Kong had seen in four years. It received such scant demand that sales agents ended the proceedings halfway through the day.

“That was a painful lesson for the developer,” said Prudential Brokerage’s associate director Alvin Cheung. “There is a huge risk in building micro flats, because once the market shows sign of turning, this type of property will be the first to be abandoned by the market.”

T-Plus wasn’t the only tiny home development to get the cold shoulder. At The Esplanade in the same neighbourhood, Chuang’s China Investments sold four out of 150 nano flats two weeks earlier. One buyer paid HK$2.88 million for a 162 sq ft unit, while the remaining three that sold ranged from 201 to 343 sq ft.

Two sales slumps over a fortnight was a clear sign to developers that the trend had changed.

“Micro-apartments were the story of a booming market, but now it is different,” said CGS-CIMB Securities’ property analyst Raymond Cheng, adding that developers would get “burned” if they do not slash the prices of these tiny flats.

To be sure, the signs were already there. In mid-November, Hong Kong’s Lands Department ordered Filipino tycoon Lucio Tan’s Eton Properties to put a hard stop to leasing its co-living space at 53 Shouson Hills. Eton had converted three luxury projects into more than 500 subdivided units, each measuring between 60 and 1,200 sq ft to rent out to young professionals, starting from HK$4,000 each. The authorities ordered Eton to return all 18 flats to their original design.

This week, Lam’s administration offered 2,545 subsidised housing in Cheung Sha Wan for sale, at discounts of up to 58 per cent to market price, offering the smallest 184-sq ft unit for HK$930,000. To qualify for the government’s subsidies, an applicant cannot earn more than HK$11,540 per month or own more than HK$249,000 in assets while the threshold for a couple is HK$17,600 in monthly income and combined assets of HK$338,000.

“Prospective buyers can now take a wait-and-see attitude because the market’s correction allow them to buy a bigger size, up to 300 sq ft, with the same budget,” said Angus Chan, chief financial officer of Far East Consortium International, whose Aspen Crest project in Diamond Hill comprises flats from 198 to 654 sq ft.

For those who did jump into the market, it’s a case of buyer’s remorse as they must now deal with the combination of declining resell prices and rising mortgage rates. Negative equity, where the value of a property is less than the loan amount, has returned to Hong Kong, after the last round took more than a decade to stamp out.

For Joshua Lin, 27, and his wife, his biggest worry now is how to squeeze his possessions into his new home at One Prestige in North Point. He took out a 30-year loan to pay for half of the HK$4 million cost of his 160-sq ft flat, after his parents helped him with the remainder. Monthly mortgage payments are about HK$8,500, he said.

“It’s a challenge to fit a bed and a wardrobe into such a tiny apartment,” Lin said, looking at a living room that measures 97 sq ft. Up to 80 per cent of the 128 units in that 30-storey tower are micro-apartments.

Some property agents have suggested that Lin should turn his studio into a loft, by elevating his bed above the floor to fully utilise the space underneath as living quarters. 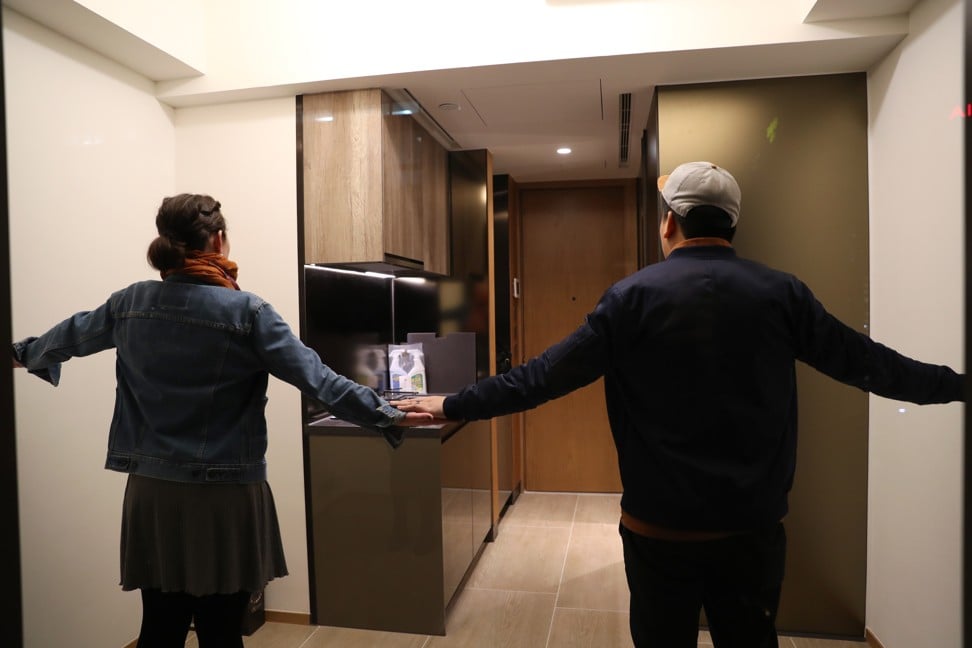 Hong Kong’s property prices are heading for steep declines of between 10 and 20 per cent in 2019, according to forecasts.

Micro-apartments are poised for the steepest slumps of up to 30 per cent, as there are an estimated 20,000 “shoebox sized” flats in the pipeline to weigh on the market, according to the same developer that got the whole trend going.

“The price of the smallest flats would suffer the most because the segment is already saturated,” said CK Asset’s executive director Justin Chiu Kwok-hung, stressing that he is merely expressing his personal viewpoint.

That may be too late for Mandy Smith, who will be leaving Hong Kong next June after a two-year stint as a teacher, because she finds the living conditions in the city way too dismal.

“I hate it because it is too small,” she said. “I cannot have a couch, it’s hard to cook here and I cannot get friends to come over.”