‘You could feel the explosion’: How Indonesia Lion Air tragedy unfolded

A passport holder belonging to a victim of the Lion Air passenger jet that crashed on Monday is seen in the waters of Ujung Karawang, West Java, on Monday. Photo: AP.

JAKARTA (Reuters): Fishermen Budi and Gauk left home an hour before dawn on Monday and, with prawn nets stowed on their shallow teak boat, they headed out in a becalmed sea off the coast northeast of Jakarta in clear weather.

About the same time, on the other side of the Indonesian capital, passengers were checking in for Lion Air flight JT610.

Then, shortly after 6.30am, their lives collided.

The Boeing 737 MAX 8 fell out of the sky near where the two men were fishing about 15km off the coast, silently at first and then with a deafening crash as it smashed into the sea.

“You could feel the explosion from the shock wave in the water,” said Gauk, who goes by only one name, telling the pair’s story from the beach in Karawang regency.

Police busied themselves with rubber dinghies and ambulances were lined up on the shoreline, but no one pretended that any of the 189 people on board flight JT610 would be found alive.

Yusuf Latief, spokesman of national search and rescue agency, said there were likely no survivors. There was no word on any probable cause for the accident. Relatives of passengers on Lion Air flight JT610, that crashed into the sea, cry as they wait at Halim Perdanakusuma International Airport in Jakarta on Monday. Photo: Reuters

Air travel is crucial in Indonesia, a vast archipelago of more than 17,000 islands that stretches about 5,100km from east to west. Although it is one of the world’s fastest-growing aviation markets, it has been plagued by air disasters.

Lion Air, a low-cost airline that dominates the domestic air travel market, has had more than a dozen accidents in its nearly 20-year history, but none with fatalities since 2004.

The captain of Monday’s flight JT610 from Jakarta to Pangkal Pinang, the main town on Bangka, a beach-fringed island off Sumatra, was Bhavye Suneja, a 31-year-old Indian citizen originally from New Delhi. He and an Italian passenger were the only known foreigners on board.

According to his Linkedin account, Suneja had worked for Lion Air since 2011, clocking up some 6,000 flight hours.

Minutes after take-off at 6.20am, Suneja reported technical difficulties and obtained permission from ground officials to turn back. Data from FlightRadar24 shows the first sign of something amiss was around two minutes into the flight, when the plane had reached 610 metres. 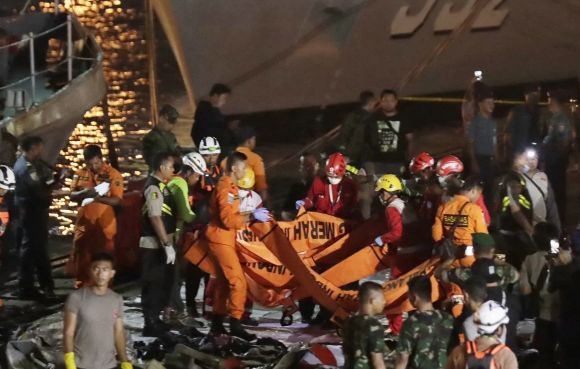 The plane dropped more than 152 metres, veered to the left and then started climbing again to 1,500 metres. It gained speed in the final moments before data was lost when it was at an altitude of 1,113 metres.

The Boeing 737 MAX 8 is the most recent model of Boeing’s famous 737, the US company’s bestselling plane, and is a popular choice among budget airlines around the world.

Lion Air’s plane was almost brand new. It was flown for the first time on August 15, and the airline said it had been certified as airworthy before Monday’s flight by an engineer who is a specialist in Boeing models. Debris from the crashed Lion Air plane floats in the sea off the coast of Tanjung Pakis Karawang, Indonesia, on Monday.

Lion Air Chief Executive Edward Sirait said on Monday that the plane had encountered an unspecified “technical issue” on its previous flight, which was from the resort island of Bali to Jakarta, but this had been “resolved according to procedure”.

“We don’t dare to say what the facts are, or are not, yet,” he told reporters. “We are also confused about the why, since it was a new plane.”

At Jakarta airport, tearful passengers waited for news: a mother urged her toddler son to “wait and be brave”, another told her crying girl, “be patient, pray the best for Papa”.

The only news that came, though, was of body parts and debris found floating in the water around the crash site.

Photos published by the search and rescue agency showed pictures of articles belonging to passengers, including ID cards, a driving licence, and a pair of children’s shoes. The father of pilot Bhavye Suneja weeps as he leaves for the airport in New Delhi, India, on Monday. Photo: AP

One of the passengers was 22-year-old Deryl Fida Febrianto, who was married just two weeks ago and was on his way to Pangkal Pinang to work on a cruise ship.

His wife, Lutfinani Eka Putri, 23, said that her husband messaged her from the aircraft at 6.12am, sending her a photo from the plane, and at 6:15am he stopped replying to her messages. They had grown up together, she told reporters, showing a picture of the smiling couple on their wedding day.

“When I saw the news, I matched the flight number with the ticket photo Deryl had sent,” she said. “I immediately started crying.” - Reuters