Two Singapores: Poverty has always existed in the cosmopolitan city state, but the setting of the hit movie ‘Crazy Rich Asians’ has seen a widening income gap in the past few years. — Reuters

IN the background, a luxury goods shop, a stooped elderly cleaner sweeping its storefront; on one side of the bridge sits expensive condominiums, bars and restaurants, on the other, rental flats housing Singapore’s poorest.

These scenes unfolded in a documentary titled Regardless of Class by Channel News Asia released on Oct 1, with a security guard revealing he felt as though he was not treated like a person. A cleaner said: “I know I’m invisible. I have to get used to this, and learn to stop caring.”

Poverty and inequality in the city state – the setting of the hit movie Crazy Rich Asians and where the per capita income is among the highest in the world, hitting US$55,000 (RM228,494) last year – has always existed.

But in the last year, Singaporeans have been confronted with discomfiting evidence of growing social stratification, shaking to the core a belief that meritocracy can smooth out unequal beginnings and lead to more equal outcomes.

Sociologist Tan Ern Ser from the National University of Singapore said class origin or background now had a greater influence on opportunity and social mobility, as the country faced slowing growth, job losses and obsolescence and an ageing population.

Experts say inequality in itself is not worrying – sociologist Tan said it could even “be good for motivating people to want to do better”.

But in Singapore’s case, it has allowed households with accumulated wealth and connections over past generations to pass on advantages to their offspring, helping them to shine, while those without the same social capital and safety nets are forced to toil harder to do the same. 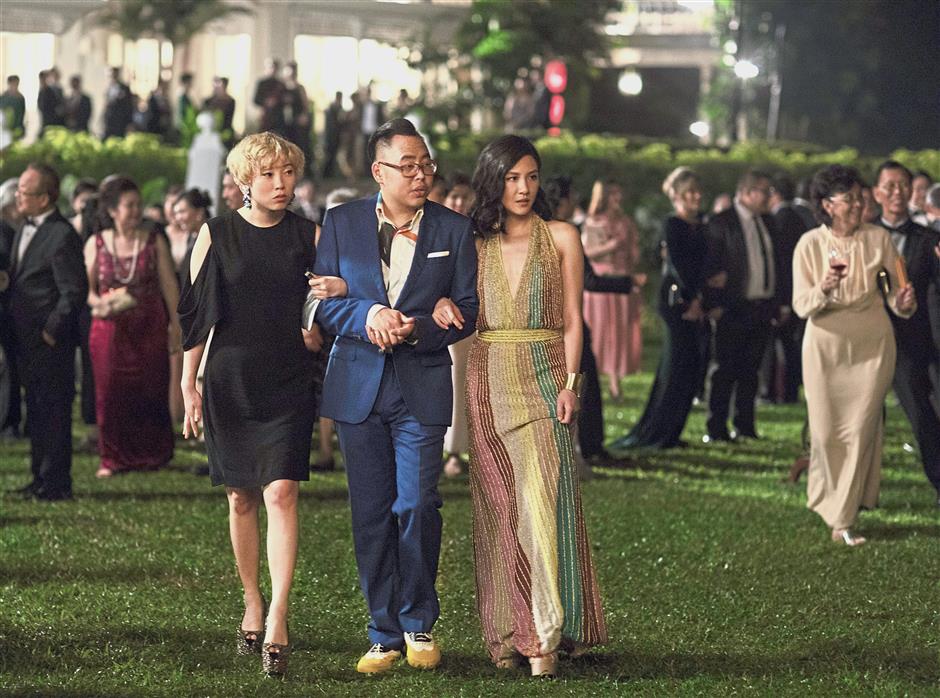 Inequality bites: In Singapore, households with accumulated wealth and connections over past generations, like the hit movie’s protagonist Nick Young’s family and friends, can pass on advantages to their offspring. —AP

As Singapore University of Social Sciences economist and nominated Member of Parliament Walter Theseira put it: “If you can buy advantages for your child, such as tuition and enrichment, they are going to end up doing better in terms of meritocratic assessments.”

Donald Low, associate partner at Centennial Asia Advisors and the former associate dean at Lee Kuan Yew School of Public Policy, said Singapore’s meritocratic and universal education system for the past 50 years led to a great deal of social mobility initially, but society would “settle” after a few decades.

“This is amplified by marriage sorting. That is the well-educated marrying one another and passing on their advantages to their children,” Low said.

A paper published last December by local think-tank Institute of Policy Studies, which demonstrated the sharpest social divisions were based on class, not race or religion, started the latest debate on the impact of inequality.

The report, co-authored by sociologist Tan, showed low interaction between students who attended elite and regular schools, and between Singaporeans living in private and public housing.

This was followed by a bestselling book by Nanyang Technological University sociologist Teo You Yenn titled This is What Inequality Looks Like, which told of the experiences of the low income group, and the systemic issues keeping them poor.

In early October, a six-minute clip on Facebook of the Regardless of Class documentary sparked feelings of discomfort, guilt and self-reflection among Singaporeans – possibly from realising “there may well be two Singapores in our midst”, said former nominated Member of Parliament Eugene Tan, a law don at Singapore Management University.

In it, six students from different education streams talked about their dreams and school experiences.

Some were aiming for an overseas degree and a minimum of A’s; others just wanted to pass their examinations.

When presenter Janil Puthucheary, a Cabinet member, mooted putting students of mixed abilities together in one classroom, a girl from the higher education stream said it was not viable, as “it might even increase the gap if these students feel like they can’t cope so they just give up completely”.

Puthucheary asked if the conversation was awkward.

One boy from the lower education stream said: “The way they speak and the way I speak (are) different, I feel like. ”

Another student completed the sentence: “Like they are high class and we are not.”

Seetoh Huixia, a social worker for 13 years who is assistant director of AWWA Family Services, said she had seen this sort of low self esteem in the people she works with. “The sense of us versus them, the inferiority complex, that they’re not good enough,” she said.

The Straits Times opinion editor Chua Mui Hoong wrote: “It got me thinking; how did we become a society that looks down on people for the work they do or the grades they get? Are we all complicit in this? Can anything be done to turn our society inside out so that we are all less disdainful, more respectful, of one other?”

Academics felt the documentary was a good conversation starter, but urged Singaporeans to look at the underlying causes of this class divide.

Low said the documentary was problematic because “the root causes of economic inequality, an elitist education system and the government’s anti-welfarism are not interrogated, and that a complex issue (of structural inequality) is reduced to people not having enough empathy or being snobbish”.

“All this class consciousness and implicit bias is a function of our systems and policies,” he added.

Teo urged Singaporeans to look beyond attitudes and focus on the inequality that had led to the divide.

“We must not focus on perceptions – whether of ourselves or others – at the expense of real differences in daily struggles and well-being. The perceptions exist in response to those differences. Just as thinking about gravity differently would not stop a ball rolling downhill, pretending differences don’t exist isn’t going to magically make the differences disappear,” she said.

Sociologist Tan said structural changes through policies would be critical. “It can’t be just about telling people to be nice and respectful toward one another.”

Experts have in the last decade proposed ways in which Singapore can mitigate gnawing income inequality, ranging from policy changes in the areas of wages, taxes on wealth, social spending, housing and education.

The government has responded by increasing its social spending — supplementing the income of low-wage workers, introducing a universal health insurance scheme, increased personal income tax rates for high earners. It has also expanded its network of social service touchpoints and just in September tweaked the education system to reduce the emphasis on examinations.

But its social spending is still lower than Nordic countries and personal income taxes remain competitive to attract talent, leading developmental charity Oxfam and non-profit research group Development Finance International to this month call out the government for “harmful tax practices”, low public social spending, no equal pay or non-discrimination laws for women and lack of a minimum wage.

They ranked Singapore in the bottom 10 of 157 governments (at 149th place), ranked on how they were tackling the growing gap between rich and poor.

One area experts agree on is that more tweaks are needed to the education system.

Singapore Management University’s Tan said apart from higher wealth taxes, “the education system needs to ensure not just equal opportunities but endeavour to provide for equal access to opportunities. There is a world of difference between the two. We may have focused on the former but not enough on the latter”.

Low said the education system needed to be “truly egalitarian”.

He suggested the state funds a national early childhood education system for children aged four onwards to remove segmentation from the get-go, to remove the national exam sat by 12-year-olds in Singapore and have schools run for the entire day so parents do not fill their children’s afternoons with tuition.

Theseira had a more novel solution: affirmative action that accords favours to the disadvantaged.

“Are we willing to contemplate that? I don’t think we are at the moment but it’s a very obvious policy that addresses this problem with the definition of meritocracy.”

There must be a sense that a class divide is harmful for everyone, especially among those who have thrived under the current system, Eugene Tan said.

“A class divide could threaten Singapore’s existence because it would pit Singaporeans against Singaporeans. The divide would render Singapore to be rife with populism and to be consumed by sub-national identities. The class divide is also likely to reinforce existing cleavages based on race, religion and language.” — South China Morning Post