ULU MUDA: On a moonless night deep in the Malaysian rainforest, two men perched precariously on high branches use a smoking torch to draw thousands of bees from a treetop hive, braving the angry swarm to collect their prized honey.

The honey hunters, as they are known, are rag-tag groups of villagers who head to remote corners of the jungle every year in search of the rare nectar, hidden in towering tualang trees.

“This is the real thing,” said Abdul Samad Ahmad, 60, who has been harvesting honey in this way for more than 20 years.

“There’s a lot of nutrition in this honey. You can make it into medicine, for your cough or cold.”

But the generations-old practice faces myriad threats, from environmental destruction and falling bee numbers to a lack of interest among the young.

The die-hard hunters remain optimistic -- for them, there is no greater buzz than climbing trees 250 feet (75 metres) tall to gather honey made by bees gorged on sweet nectar from exotic jungle flowers. 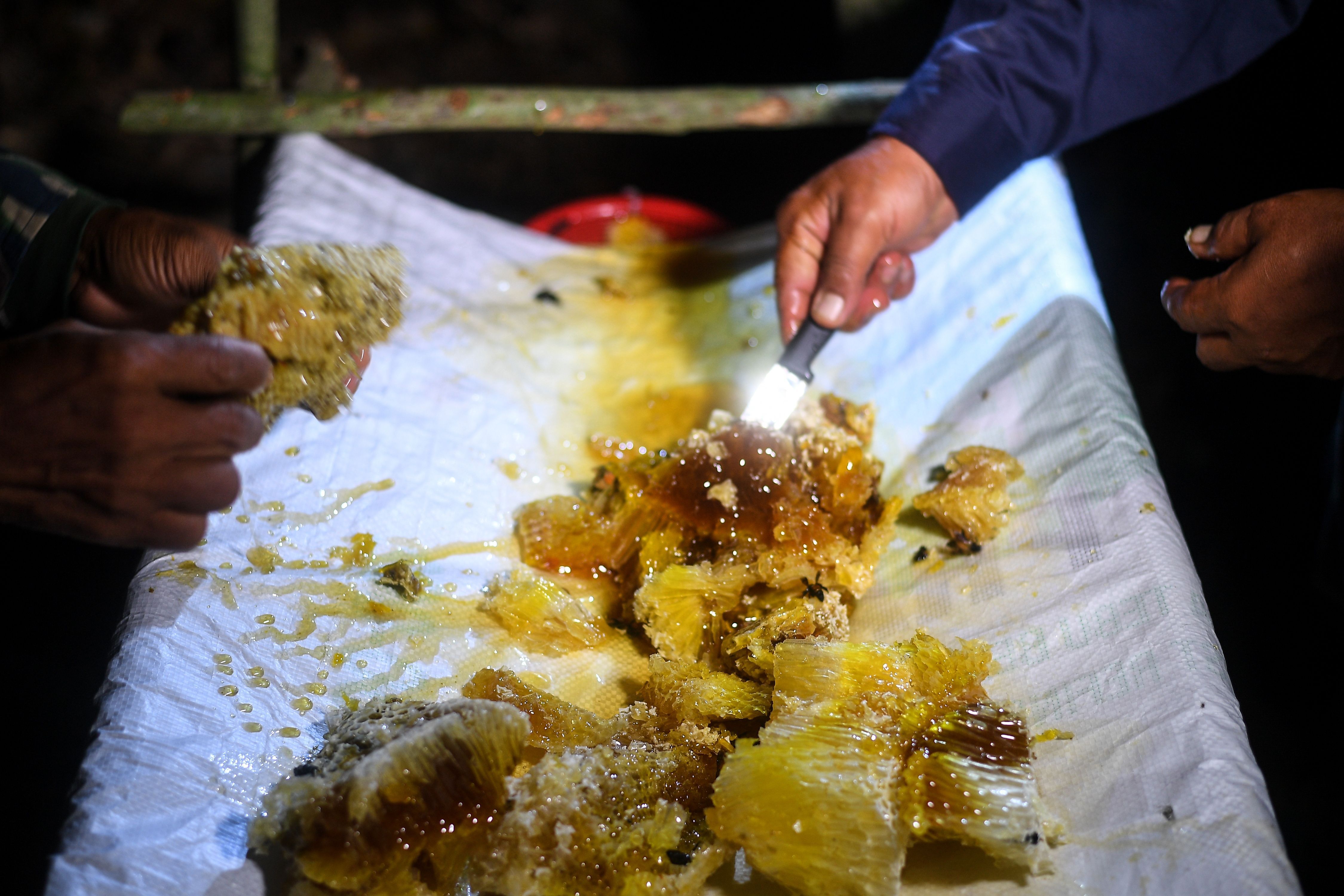 ‘Sting until your body is swollen’

The honey-collecting season in northern Malaysia’s Greater Ulu Muda forest runs from February to April, when giant honey bees arrive from other parts of Asia to make their hives in the trees that stretch high above the rainforest canopy.

On a recent trip, Abdul Samad and six others travelled far into the forest, boarding two small boats and sailing across a lake to reach a tualang. They nailed branches up its trunk a few feet apart to create a makeshift ladder, replacing old ones from the previous year.

As night fell, after layering up and donning thick jackets, the group lit vine roots twisted together to create a smoking torch.

They clambered up the tree, hitting the torch against the trunk as they approached a hive. A flood of embers showered below, and a team member called out to the bees: “Come down, black sweet, come down.”

A swarm of bees rushed out, chasing the sparks of light -- granting the hunters precious moments to cut through the hive and fill a bucket with chunks of honeycomb.

The men worked through the night, slowly moving around the tree’s many hives and only stopping just before dawn, having collected 43 kilograms (94 pounds) of honey.

The hunters were stung numerous times but continued working, insisting they are used to the pain.

One of the group, Zaini Abdul Hamid, said he and his fellow hunters are not aware of any deaths resulting from the risky pastime, “but if you’re in the wrong place, at the wrong time, the bees will sting you until your body is swollen”. 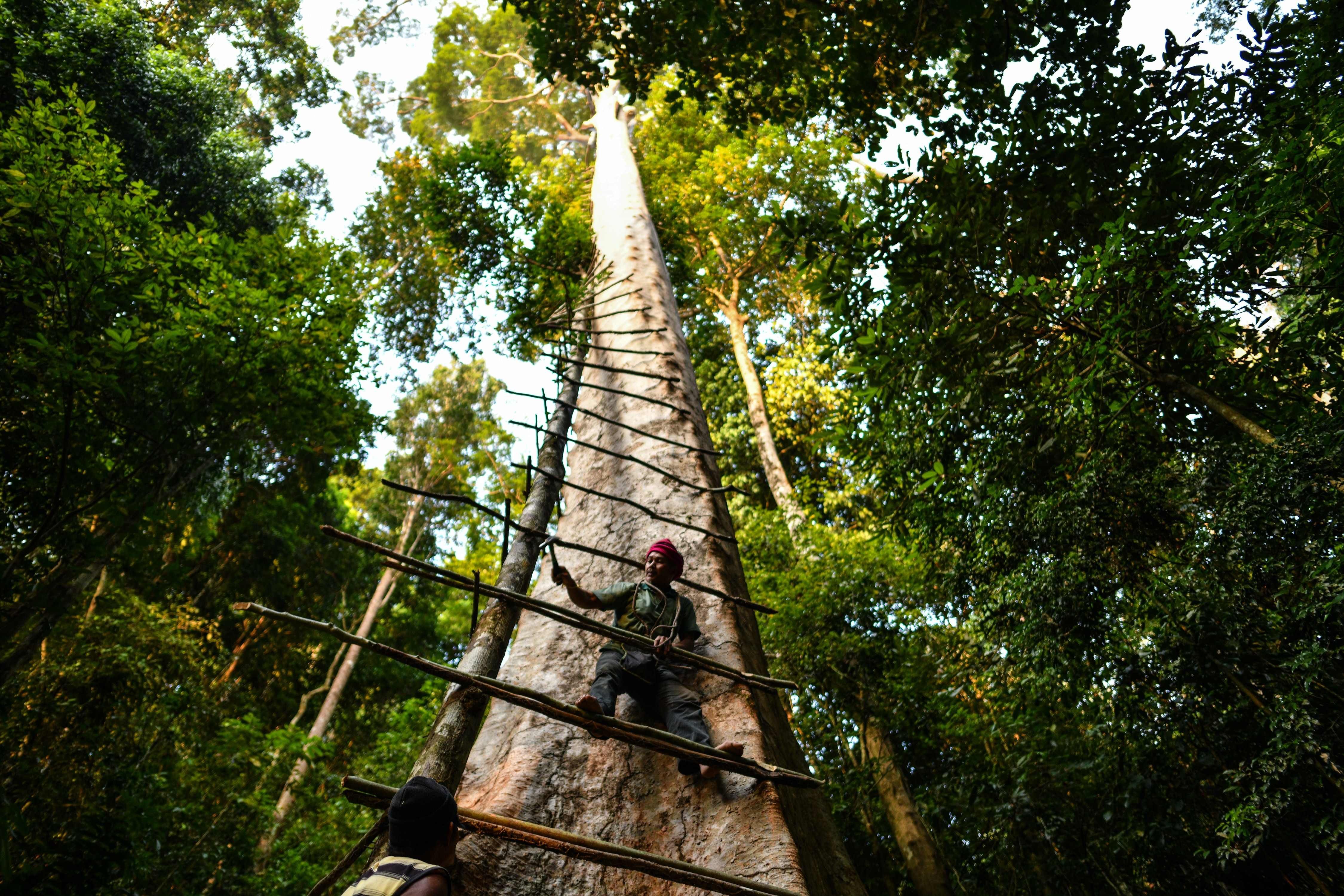 Demand for tualang honey exceeds its limited supply, and the bounty is split equally among the group, who sell it in their village or to dealers from out of town.

None of those on the recent expedition were younger than 45, with some in their 60s, and they said younger people from their villages have no interest in taking up honey-hunting.

“They’re not brave,” said Mohamad Khairi Mohamad Arshad, while Zaini lamented that the younger generation “prefer to play with their gadgets -- we asked them to come, but they’re not interested”.

The hunters said it was common to see four to five groups from a single village harvesting from tualang trees in the 1960s, but these days there are far fewer.

The number of bees in the Ulu Muda forest also appears to have fallen in recent years, with heavy logging regularly reported and some blaming the destruction of their natural habitat.

The problem may also be global. Experts have long been sounding the alarm about declining honey bee populations worldwide, blaming climate change and disease as well as habitat destruction.

No comprehensive studies have been done on bee populations in Ulu Muda, but Makhdzir Mardan, a bee expert from Universiti Putra Malaysia, said that on an expedition into the forest in 1983 he had spotted 128 hives on a tree, while now you could expect to find 40 at most.

As they trekked deeper into the jungle, the honey hunters mourned the loss of the bees’ habitat, particularly the flowers they feed on.

“The places where the bees look for food are disappearing,” said Mohamad Khairi Mohamad Arshad, 50.

“If there aren’t a lot of flowers, then the bees will not come.” -AFP