Pekanbaru: Air quality in Dumai regency, Riau, has worsened, with the latest air quality index showing a moderate level of pollution resulting from recent fires in surrounding peatland, an official has said.

“The PSI level stands at 43,” Tengku said on Wednesday, referring to the pollutant standard index.

Tengku said his agency would take measures to prevent air quality from worsening.

“We do not want it (the air pollution) to disrupt two major events: the Asian Games and the regional elections,” he said.

Dumai is nearly 1,000km away from Palembang, the capital of South Sumatra, which will co-host the quadrennial sporting event in August. Riau will also hold a regional election in June.

Tengku claimed that this year’s fires were less severe than those in 2015 and 2016, when fires decimated vast areas.

In 2017, the agency reported that the fires affected 64ha.

Tengku attributed the cause of the fires to the dry season.

“Rain is helping us put out the fires,” said Slamet Riyadi of Riau BMKG. — The Jakarta Post/Asia News Network 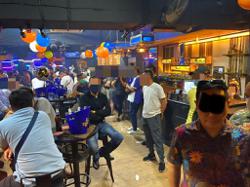