Look for the strength in every child, Alibaba’s Jack Ma urges China’s teachers 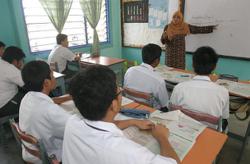 Chinese billionaire Jack Ma Yun urged teachers to find the strength in each child as his charitable foundation recognised the efforts of rural educators on Monday.

Drawing on his own experience, Ma, a former English teacher and the founder of Alibaba Group, which owns the South China Morning Post, said a teacher’s encouragement could play a decisive role in a child’s future.

“I was not interested in most subjects in primary and middle school, except English,” he said at the foundation’s annual awards ceremony in Sanya, Hainan province.

“My English teacher said to me, ‘Ma Yun, your English pronunciation is pretty good.’ This sentence gave me a lot of confidence and ushered me through the door of learning English.”

Ma said his first chemistry teacher at middle school was a serious man and always criticised him no matter what he did. “So I just gave up learning this subject,” he said, as he extended what was initially scheduled to be a 10-minute session into more than an hour.

“The influence of teachers on children can last a lifetime and this influence is bigger than we can imagine. Simple praise and a simple sentence of recognition is so important for children.”

Despite poor academic results in his early studies, Ma went on to become an English teacher in Hangzhou, Zhejiang province, before founding Alibaba.

He said teachers needed to consider three elements that made up a child’s education: academic knowledge, personal skills and sporting ability.

Could online classrooms be the answer to teacher shortage in rural China?

“Music, arts and physical education are important for children,” he said, adding that teachers should teach students to have broad horizons.

“Every child is special. It’s fate that he or she becomes your student. It’s your responsibility to teach him or her well.

“A good teacher can discover a child’s strong points that maybe he or she did not know.”