TOKYO: While millions in China celebrate Singles' Day today, many Japanese will be nursing a drink or slurping noodles at "stand up" bars and eateries.

Nov 11, or 11.11, it is said in Japan, looks like two pairs of legs standing. And drinking on your feet, or "tachinomi" in Japanese, is a deep-rooted casual dining subculture in the typically tight-suited society that has a code of conduct for every setting.

Since there are no chairs, the delicate problem of ensuring the most senior person by age or social standing gets the "best seat" is conveniently sidestepped. Freed from the strictures of protocol, colleagues can unwind on their feet as peers over beers. A quick swig or two and everyone is ready to head home. 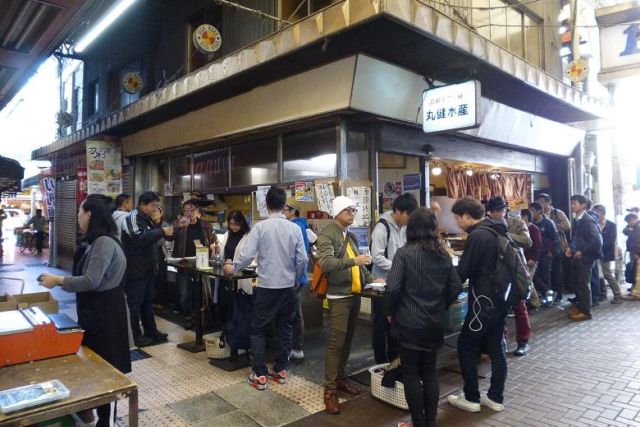 "Socialising over drinks often comes at the end of a long day's work, so... a quick one for the road is welcome and does the job," said Keita Nakamura, 43, who works as a sales manager for a manufacturer.

Fellow tachinomi regular Masahiko Kase, 35, said: "Tachinomi is great because it implies a quick drink. You don't feel like you will be trapped for a few hours. It's casual and quick - and, best of all, cheap."

In a country where wages have not budged much over the past four years, and as more people stay single, tachinomi as well as the associated tachigui, or "stand and eat", are flourishing.

So much so that Nov 11 is now celebrated as Tachinomi/Tachigui Day. First coined by a popular food blogger and officially registered with the Japan Anniversary Association in 2010, the day is now marked with special discounts at many bars and eateries. Some even band together to offer stand-and-bar-hop specials.

There is bound to be at least one tachinomi bar in every drinking alley in Tokyo and it is likely to be packed after office hours - mostly with salarymen in suits.

Drinks are typically around 20% cheaper than at sit-down bars, with no obligatory table charge. The grub is reasonably priced and snack-size - easy on both the wallet and stomach.

"Beef bowls at lunch and tachinomi after work - these are two pillars of support for the salaryman," said Takuya Wada, 50, a sales director for a publishing company.

Tokudasaketen near Osaka train station has been supporting the tired elbows of salarymen and retirees at its standing counters since 1890, offering "one coin" - understood to refer to the 500-yen (RM18.46) coin - beer and one-dish sets.

Its eight branches around the central business district of Osaka provide "an oasis" for people working in the area, said Tsuyoshi Saito, 55, a corporate consultant who used to work in Osaka.

For many of these establishments, the taps start flowing early - from as early as 10am. Breakfast sets consist of beer or sake with a hard-boiled egg or tofu.

The shops cater to not just the office crowd but also retirees.

"It's an affordable hangout for the elderly, giving them somewhere to go and meet people and chat," said Saito.

While bars are the backbone of tachinomi, soba and sushi eateries, which can be found at most train stations across Japan, are tachigui staples. In fact, both tachigui genres date back to the 1600s.

"Standing while eating was a common phenomenon in Edo (modern-day Tokyo)," said independent food and beverage consultant Ruriko Iwamoto, 41. "A lot of workers came from outside of Edo and, with no family here, would often settle their meals outside.

"Sushi was one of the earliest kinds of fast food, and eaten standing by the Edo River. So was soba. And tempura was also eaten standing, as a snack."

Today, the rise in single-person households - of those who are unwed, divorced or widowed - means there is a growing section of society that often dines alone.

"Tachigui provides a great option for people who do not have companions to eat with but want to eat out, or have no time to cook. There is no stigma to eating alone at a tachigui eatery," said Ryuji Tominaga, 26, a tachigui regular.

"Nobody likes going into a restaurant and being asked, 'Table for one?' "

In recent years, tachigui has extended its reach to diverse foods such as premium steak, as well as French, Italian and traditional Japanese cuisines.

"It reflects a change in lifestyle due to deflation and demographics, but at the same time a desire to dine out without spending too much time or money," said Iwamoto.

The tachigui industry is also attractive to food and beverage entrepreneurs cost-wise, as they need only a small shop space and get to save on staff costs as minimum service is provided. Operators therefore are able to offer quality dishes at prices lower than those at sit-down venues.

Ikinari Steak, Japan's first stand-up steak chain, opened its first shop in central Ginza, Tokyo four years ago and now has more than 150 outlets, with plans to open about 20 more by the year end.

In February, it even opened its first overseas outlet in New York.

Founder Kunio Ichinose, 75, said the market for stand-up dining has definitely grown, and not just in Japan. "When people heard I was going to open in New York, they said American people don't want to eat steak when they are standing."

But the reasonable prices, which start at US$2.55 (RM10.77) an ounce, a growing interest in Japanese food and the quality of the steak - served sizzling on a hot plate with Japanese soya sauce-based seasoning and wasabi - has gained the eatery a firm footing in the East Village dining scene.

"Not a place to take your date but a good chance to meet and chat with strangers," said an online review of the eatery.

The chain plans to open a total of 10 outlets in New York this year.

Another food and beverage chain, Ore no, has combined tachinomi with French and Italian food. Its restaurants, Ore no French and Ore no Italian, were featured in the 2015 Michelin Guide.

"These chains allow high-end cuisine to be enjoyed at affordable prices in a casual atmosphere, so they are very popular with ladies and the young professional crowd," said Iwamoto.

But stand-up dining may not be for everyone. When Ore no opened a traditional Japanese cuisine restaurant in Hong Kong, chairs were very much a part of the operations.

"In Hong Kong, if people are going to eat Japanese, it's a special event and not something to skimp on, so generally people want to sit down and eat and talk leisurely over dinner," said Cally Chan, 29, a Hong Konger working in Tokyo's finance industry.

Iwamoto said: "It may be hard for the stand-up culture to take root in other countries though, where drinking or dining after work isn't so entangled with work." – The Straits Times/Asia News Network

Dos and don'ts of dining on your feet

If you feel like trying out tachinomi or tachigui in Japan, there are some unwritten rules to take note of:

• Take along small change; credit cards are not usually accepted

• Go in big groups; standing room is limited and tables are small

• Linger after you have finished your food and drink - there are no chairs for a reason!