Tattooed Thai gangster-turned-actor back in jail

(FILES) This file photo taken on May 19, 2017 shows Thai actor Panya Yimumphai posing during a photocall for the film A Prayer before Dawn at the 70th edition of the Cannes Film Festival in Cannes, southern France.Better known by his gang name Keng Laiprang (Keng Camouflage), Panya began a three year jail sentence on August 23, 2017 on a conviction linked to a crime committed 10 years ago, back when he was an inmate. / AFP PHOTO / Anne-Christine POUJOULAT

BANGKOK: He turned heads on the red carpet at Cannes earlier this year with his face tattoos and is one of Thailand’s most popular social media stars, but gangster-turned-actor Panya Yimumphai (pic) is now back behind bars.

Better known by his gang name “Keng Laiprang” (Keng Camouflage), Panya began a three-year jail sentence on Wednesday on a conviction linked to a crime committed 10 years ago, when he was an inmate.

The sentence has since sparked a heated online debate in Thailand.

In recent years, Panya has become one of Thailand’s best known celebrities, largely thanks to a full set of face tattoos he acquired in jail while serving an eight-year sentence for robbery.

After his release in 2011 he became an online video star and actor, amassing more than two million Facebook followers and endorsing everything from his own food brand to sexual enhancement pills.

International recognition came earlier this year when Panya starred in A Prayer Before Dawn, a critically acclaimed British-French drama that tells the story of a British convict forced to box in a Thai prison.

Unsurprisingly Panya was cast as a key gangster figure, a role he needed no method actor training for.

But Panya’s past has caught up with him once more.

In 2014, three years after his release from prison, police filed a new charge against him for drug possession dating back to a 2008 prison search in which Panya was allegedly found in possession of a packet of crystal meth.

On Wednesday, he was sentenced and jailed after pleading guilty.

Panya’s family plans to appeal the ruling and have requested bail. A decision is expected in the next few days. — AFP 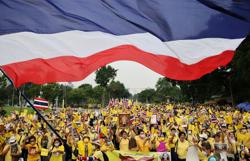 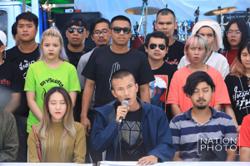