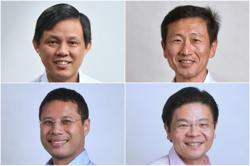 SOLDIER Ong Jia Hui drowned while training off Changi Naval Base - before the very eyes of his four instructors standing less than 10m away.

None of them saw him slip underwater on June 15.

At Second Sgt Ong’s inquest on Thursday, the State Coroner blasted the four instructors’ lack of vigilance and found them responsible for his death through their negligence.

The Ministry of Defence had earlier said no safety regulations had been breached in the 24-year-old soldier’s death.

Second Sgt Ong, who had been training with four other Singapore Armed Forces (SAF) regulars, was found lying on the seabed moments after the instructors did a headcount and discovered they were one man short.

His life jacket, which was later found to be defective, was never inflated.

The coroner’s report stated that as the leaking life vest was not activated, it “did not contribute” to Second Sgt Ong’s drowning.

The SAF regular could not be revived and died in Changi General Hospital.