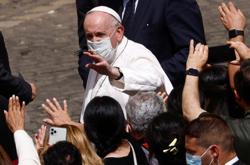 SINGAPORE: The Roman Catholic Church has suspended confessions in Singapore due to the spread of the deadly SARS virus and priests will instead forgive all churchgoers for their sins, the church said yesterday.

“The Archbishop of Singapore has issued a directive to the priests that there will be no individual confessions and that they are to issue general forgiveness,” said a spokesman for the Catholic News, which represents Singapore's Catholic Church.

SARS, or Severe Acute Respiratory Syndrome, has killed at least 103 people worldwide, including nine in Singapore. The city-state has the world's fourth-highest number of confirmed cases.

Singapore Archbishop Nicholas Chia said a general absolution without one-on-one confessions only can be given in times of “grave necessity” according to the Bible.

“In view of the SARS epidemic, I have obtained permission from Rome for our priests to grant a general absolution instead of individual confessions and absolution,” Chia said in a letter to Singapore's 152,000 Catholics.

Catholics in Singapore are already banned from holding or shaking hands in church to prevent the spread of SARS and holy communion wafers can only be issued on the palm of the hand.